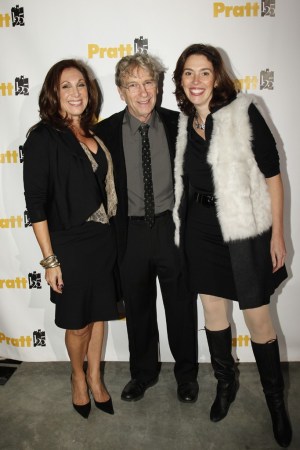 Workaholic seemed to be the chief criteria for this year’s Pratt Legends award winners.

Pleased as they were to be honored Tuesday night at 7 World Trade Center in Manhattan, multimedia artist Laurie Anderson, photographer William Wegman and interior decorator Juan Montoya made clear there is work to be done.

Anderson not only provided the post-dinner entertainment, but she also performed during her acceptance speech by playing a pillow speaker with a recording of a violin and in doing so revealed another talent — humor. “I have always wanted to sing like a violin,” she said, before playing the small electronic device in her mouth. “What a pillow speaker is used for is you put it in your pillow and you, like, learn German in your sleep. I already tried that and I only woke up feeling super paranoid. I’m also the kind of person who gets a little charge out of putting electronics in my mouth.”

Renegade that she is, Anderson couldn’t help but note the view from atop 7 World Trade Center. The performance artist said, “Occupy Wall Street is right down there and to the north is Goldman Sachs, as someone pointed out, ‘They’re not worried about their electric bill.’ I don’t know what they’re doing over there. They’re probably shredding paper. They’re working and…”

Addressing the younger artists in the room, she said, “I just have to say to you what a wonderful time to be an artist between these two poles and to find what it is to make art in this particular world. It is a very, very amazing time.”

Salman Rushdie spoke of Anderson’s many gigs in art, music, theater, film, ballet and even a stint as artist-in-residence at NASA before handing over her award. “For those of us who are stuck in the awful tyranny of having to do one thing at a time, an artist like Laurie Anderson, who has always done about 17 things at the same time, is simultaneously an inspiring figure and a humbling proof that we won’t be able to do what she does, so it would probably be best not to try,” said Rushdie.

In introducing Wegman, Agnes Gund (who as a teenager babysat for his wife, Christine Burgin), noted how his body of work includes scores more than photos of “Man Ray,” “Fay Wray” and his other Weimaraner dogs. To that end, “Spelling Lesson,” a video Wegman made in the Seventies, was played for the event’s 310 artists. In thanking the crowd, Wegman said, “I was trying to think of what I was going to say before and I tried to write things down but I just bored myself.”

Chaired once again by Marjorie Kuhn, Amy Cappellazzo and Kurt Andersen, this year’s Legends dinner raised more than $400,000 for Pratt’s scholarship fund. But in the spirit of a night that seemed to center on the premise that an artist’s work is never done, Pratt is already gearing up for next year’s 125th celebration of the school. Jean Shin, an alumna and faculty member known for her full-on installations, has started collecting personal memories and objects from Pratt-ers for “Recall,” a public art project that will be unveiled in the spring on the Brooklyn campus.