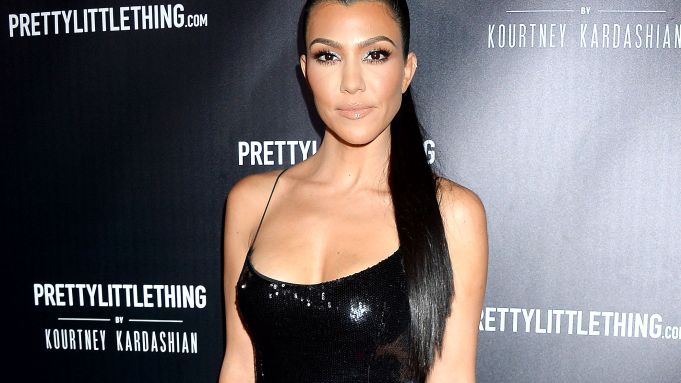 While much of the attention Wednesday night at West Hollywood nightclub Poppy focused on the gaggle of celebrities and other influencers assembled there, the celebration really served — to anyone who perhaps hadn’t noticed — the highlight rapid strides PrettyLittleThing has made in the U.S. and elsewhere since its acquisition by Boohoo.com plc this year.

The party on the surface was to celebrate PrettyLittleThing partnering with the eldest Kardashian daughter on a wide-ranging collection of outerwear, apparel, shoes and accessories. The lineup includes faux-fur coats in colors such as burgundy and lime, barely there bodycon dresses ranging from velvet to satin lace, wide-leg jumpsuits and stiletto heels and boots. Those who came out to toast the reality TV star included Shanina Shaik, Christina Milian and Wiz Khalifa.

“Kourtney Kardashian is huge. She has a big presence around the world. She comes from one of the biggest families around the world,” said Umar Kamani, who cofounded PrettyLittleThing with brother Adam Kamani in 2012. “Our target customer resonates with her family so well and looks up to that family that working with the Kardashians as a whole is something that has been influential for PLT as a brand.”

Collaborating with famous faces, including other members of the Kardashian and Jenner clan and more recent links with Olivia Culpo and Sofia Richie, has been key to PrettyLittleThing’s rapid rise. The e-tailer after all bills itself as a resource for fashion and celebrity style.

“For me, PLT is a brand that every girl should be able to wear from an affordability perspective,” Kamani said. “We don’t build ourselves up. We’re not too expensive for anyone, which makes it so nice when these role models to these young girls are wearing the brand. It makes everything that much more relatable to the customer. For that reason, having such amazing influencers and celebrities brings that all to life.”

The brand’s success story is telling by the numbers.

PrettyLittleThing reported revenue for the six months through August, up 289 percent to 72.7 million pounds, or $96.4 million based on current exchange rates. The company, under its new parent, has edged up slightly in pricing, improved delivery times to markets such as the U.S., boosted the beauty assortment and also introduced a new curvy line. Average order values for the first half of PrettyLittleThing’s fiscal year ticked up 25 percent to 37.95 pounds, or $50.32.