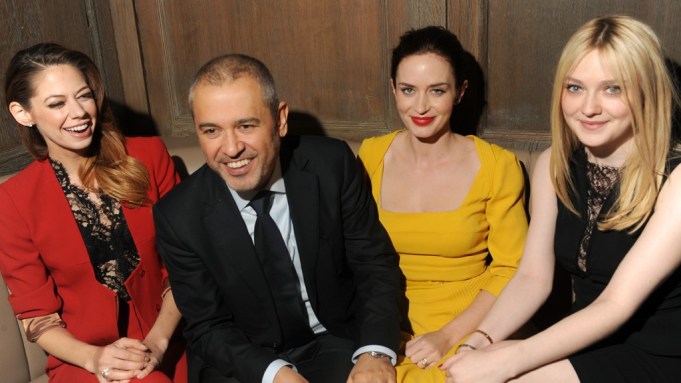 “Everyone looks so beautiful,” Elie Saab enthused by the narrow bar at Crown on Thursday night before a private dinner being held in honor of his rare trip to New York. The designer was the star of the night, with wife Claudine and their three sons all present and effusive in their support. The candlelit space was intentionally dim, for ambience, but the trio of starlets who came out for Saab vibrantly stood out, especially because two of their ensembles being primary colored: Analeigh Tipton wore a lipstick-red pantsuit over a lace bodysuit and Emily Blunt wore a canary-colored cocktail dress, both by the designer. Dakota Fanning wore black.

“Oh, I just loved the lace,” Fanning said of the narrow triangular panel cut from her collarbone to navel on the formfitting Saab creation.

Tipton, who starred in “Crazy Stupid Love” last summer and Whit Stillman’s “Damsels in Distress,” which had its premiere this week, is no stranger to the fashion industry. She placed third on Tyra Banks’ reality television series “America’s Next Top Model” in 2008.

“It was years ago,” Tipton said of the televised modeling competition. “Reality TV was still pretty new, so I just thought it would be a cool experience, and it was. I loved being on that show.”

The three-course dinner boasted massive portions (a New York strip steak was an impressive slab, the chocolate and caramel tiered dessert no small feat, either) and seating seemed to be divided by profession or avocation. Amanda Ross, Jennifer Creel and Allison Aston were all together near Natalie Leeds Leventhal and Samantha Boardman, while Blunt and Fanning were at a smaller table with Saab and his wife. Those affiliated with magazines or periodicals filled a nearby banquette.

“It’s sort of ghetto-ized, isn’t it?” one guest remarked, “though we all have Elie in common.”