The event, held at Daniel, played as a warm-up act for later that evening at the Princess Grace Foundation's philanthropic awards. 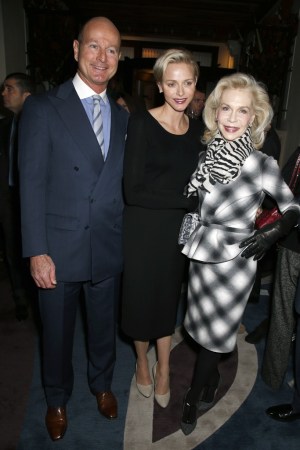 Princess Charlene of Monaco stopped by Daniel in Manhattan on Wednesday afternoon for a lunch in her honor, the last gasp of the American leg of her latest international tour, which has taken her from Philadelphia to the Upper East Side in five days.

She and husband Albert II have been hopscotching between world capitals for the better part of the last month and a half.

“This is my second trip now to the States. We were here for the United Nations, flew back and went to Russia for an official visit, caught two [fashion] shows in Paris in between and went from there to Morocco for different events,” she said.

The princess refers to the trips as being “on the road,” as if she’s playing venues, though one assumes her accommodations are better than those for your average traveling musician.

She was conducting the New York portion of the trip solo.

Trent Fraser, vice president of Dom Perignon, which sponsored the lunch, said the house partnered with the Princess Grace Foundation because “we have a very similar vision between the two brands, if I can call them brands.” He isn’t entirely off in referring to the foundation named 30 years ago in honor of Grace Kelly, Albert’s mother, as a brand. Her name has lent the organization a glamorous gravitas that perseveres as much as her own celebrity. The lunch was preceded by a Ralph Lauren-sponsored screening on Monday of “To Catch a Thief,” one of Kelly’s classics, that was attended by Chanel Iman, Toni Collette, Fabiola Beracasa and Julie Macklowe. On Saturday, the prince and princess opened a retrospective exhibit dedicated to the late actress in Philadelphia.

The luncheon at Daniel was meant to play as a warm-up act for later that evening, when Charlene would venture as far downtown as an H.R.H. can to Cipriani 42nd Street for the foundation’s philanthropic awards, which support emerging artists and since its inception has given away some $10 million in grants to, among others, playwright Tony Kushner and Stephen Hillenburg, the creator of “SpongeBob SquarePants.” A bevy of Park Avenue names turned up — Lynn Wyatt, Denise Rich, Ondine de Rothschild, Beracasa again, as well as the odd royal, like Prince Dimitri of Yugoslavia. At one table, the conversation revolved around the tax benefits of dual residency in the Bahamas and the advantages of flying on Singapore Airlines instead of Cathay Pacific or Qantas.

“It’s very important in terms of fund-raising, in terms of the support,” Charlene said of her trip to New York. “This foundation stays alive because of everyone in this room. I know somehow the message will get out and people will pay a little bit more attention and say, ‘We would like to get behind this.’”

Taking in the scene, she was gratified by the turnout.

“It’s wonderful to be here. I love America,” she said before getting up to continue her rounds.