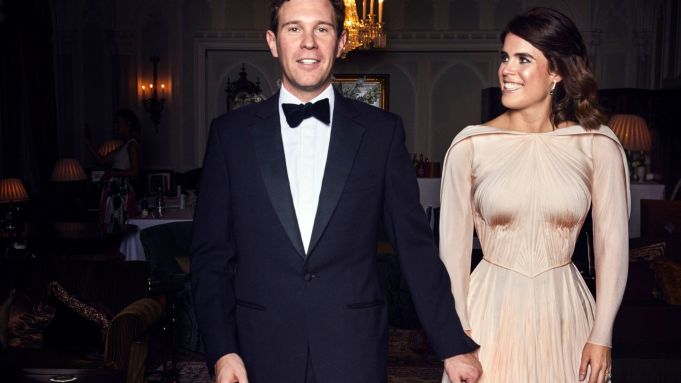 LONDON — After tapping Peter Pilotto for her wedding dress, newlywed Princess Eugenie turned to the American designer Zac Posen to create her evening gown for the black-tie, Great Gatsby-themed wedding reception at the Royal Lodge in Windsor.

The princess, who wed Jack Brooksbank at St. George’s Chapel in Windsor on Friday morning, later changed into a blush pink, pin-tucked plissé silk dress with a cape at the back. Similar to the wedding dress, the evening number was adorned with the White Rose of York, which was embroidered on both the shoulder and back.

The princess completed the look with a hairpiece belonging to her grandmother Queen Elizabeth that was made from Queen Victoria’s wheat-ear brooches. She also wore diamond and emerald drop earrings, a wedding gift from the groom.

The pair zoomed over to their wedding reception in an Aston Martin DB10, which had originally been designed for the James Bond movie “Spectre.” During the evening, Robbie Williams broke into song, belting out “Angels” and “She’s the One.”

The celebrations didn’t end that night, with the newlyweds hosting yet another party on Saturday. They turned the grounds of Windsor Castle into a carnival-style party complete with funfair rides and food stalls.

On Friday, figures from the art world, celebrity guests and close friends of the couple made their way St. George’s Chapel in Windsor for the couple’s nuptials.

Socialites Pixie Geldof, Holly Branson and Chelsy Davy arrived together with an international roster of celebrities that included Demi Moore, Liv Tyler and Naomi Campbell, whose hat with black flowers almost blew off in the strong wind.

Moore and Tyler were both dressed in Stella McCartney, the former in a wine red dress and the latter in a black midi-skirt suit.

Princess Charlotte and Prince George, who were part of the wedding party, climbed up the long row of steps along with the rest of the flower girls and pageboys. The girls wore ballerina-style dresses with sashes tied in a bow at the back, while pageboys wore white shirts and navy blue trousers with green printed cummerbunds that matched the girls’ bows.

After the 800 guests filed into the chapel, Princess Eugenie — dressed in a gown by Peter Pilotto — arrived with her father, Prince Andrew.

The princess swept up the steps of the chapel at 11:00 am local time wearing the long, white dress with a wide V-neck, a fold around the shoulders, a revealing back and a long train.

She broke with tradition, opting to go without a veil and arriving at the chapel with her face in full view, wearing the Greville Emerald tiara designed by Boucheron in 1921. She is carrying a bouquet of wildflowers and Angel’s Breath.

The dress was an elegant choice, compared to some of her previous fashion mishaps. Who could forget the floral and feathered fascinator she wore to the Duke and Duchess of Cambridge’s wedding in 2011?

Peter Pilotto was an unusual — but inspired — choice for Eugenie, whom many had expected to choose a traditional wedding dress designer.

Designers Peter Pilotto and Christopher De Vos of Peter Pilotto aren’t known for their bridal gowns or even for monochromatic designs. For their spring 2019 collection, they worked a Polynesian fantasy, staging their show at Trader Vic’s tiki bar under the Hilton hotel on Park Lane in London.

Eugenie first met the designers when she was co-hosting an event in support of the Artemis Council for Women Artists, and has been wearing designs by the brand for several years.

She and the two designers worked closely on the dress, with Pilotto and De Vos undertaking archival research into previous gowns worn by members of Britain’s royal family.

The fabric was designed by Pilotto and De Vos at their studio in East London and includes a number of symbols that are meaningful to the princess, according to the designers.

The symbols are a thistle for Scotland, a shamrock for Ireland, The York Rose for England. The ivy, represents the couple’s home, Ivy Cottage, on the grounds of Kensington Palace.

Pilotto and De Vos said they reinterpreted those symbols in a garland of rope-like motifs, woven into a jacquard of silk, cotton and viscose blend. Once the artwork was completed, it was translated into a jacquard weave at a mill near Lake Como.

According to the designers, the dress was developed layer by layer starting with the corset and the “complex underskirt.” It features a fitted bodice and full pleated skirt while the neckline folds around the shoulders to a low back that drapes into a flowing, full-length train.

The low back on the dress had been a specific request from the princess, and it was meant to show the scars from the surgery she had, aged 12, to correct her scoliosis. Jan Lehovsky, the surgeon who performed the operation, is a guest at the wedding.

Eugenie’s sister, Princess Beatrice, started off the ceremony with a reading from F. Scott Fitzgerald’s novel, “The Great Gatsby,” and the Dean of Windsor, The Right Reverend David Conner, officiated the marriage.

After exchanging their vows, the couple made their way back down the aisle and toward the horse-drawn carriage for a traditional carriage procession that took the newlyweds around the streets of Windsor, which were crowded with well-wishers.