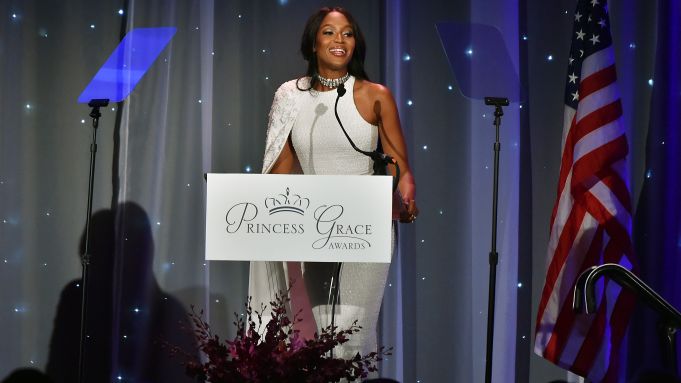 “Excuse me, are you Aaron Burr, sir?”

A passerby had caught sight of Leslie Odom Jr. outside of Cipriani 25 on Monday night. The actor was arriving at the Princess Grace Foundation Awards Gala, where he was being honored along with Camille A. Brown with the Princess Grace Statue Award. He’s gotten used to attention from strangers since his first time at the awards in 2002, when he won a Princess Grace Award. Since that prestigious hat-tip from the organization, which provides support to emerging artists, he’s gone on to gain significant recognition, most visibly for his role in “Hamilton,” which he won a Tony Award for this year.

“Without my [Princess] Grace Award, I don’t think I would have been able to complete my education at Carnegie Mellon University,” Odom Jr. said, donning a shiny David Hart suit for the event. “It’s something I lean on everyday.”

The foundation carries on the legacy of Princess Grace Kelly of Monaco. Her son, Prince Albert II of Monaco and his wife, Princess Charlene of Monaco, had come to town for the gala. Charlene was wearing Christian Dior Couture, the presenting sponsor for the event. “[Princess Grace and the house] were very close even before she was married to Prince Rainier — she was already wearing Dior,” Sidney Toledano explained of the brand’s relationship with the foundation. “We are continuing the relationship with Prince Rainier, Prince Albert and Charlene. It’s important also because of the foundation’s objective regarding helping young talent in theater, singers and performers. Right away we decided to be partners.”

“Dee’s very friendly with the family,” Tommy Hilfiger said before dinner, standing next to wife Dee Ocleppo. “We support the foundation every year; we think that they spend the money wisely. We like supporting young artists.”

Inside, the crowd enjoyed a dance performance by Tiler Peck, a former Princess Grace award winner, and Robert Fairchild before settling into a leisurely dinner. Shortly before midnight, Prince Albert II took the stage from gala host Naomi Campbell to present the Prince Rainier III Award to Queen Latifah in recognition of her outstanding contribution to the arts.

“This year’s extraordinary statue winners, Leslie Odom Jr. and Camille Brown, your accomplishments are outstanding,” he said, before introducing Queen Latifah. “And all the other incredible award winners that have graced the stage, your success transcends my mother’s women helping artists reach their fullest potential.”

Queen Latifah took the stage — and her statue — glowing in a white Christian Siriano gown. “I looked up to Grace Kelly when I was a kid,” she began. “I thought she was so beautiful, so talented and never would I have thought in a million years that I would be having dinner with her son. God is funny like that.”