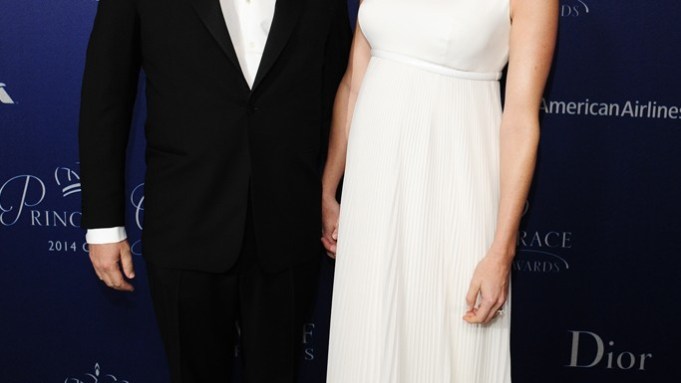 “Hollywood royalty” is one of the most overused terms in the fashion and entertainment press, but an apt one to describe the scene Wednesday night at the Beverly Wilshire Hotel.

That’s when HRHs Prince Albert II and Princess Charlene of Monaco called on what passes for the kings and queens of the entertainment business — Quincy Jones, TV boss Dick Wolf and wife Noelle, Disney’s Robert Iger and uberproducer Jerry Bruckheimer — to convene for the presentation of the annual Princess Grace Awards.

Charlene, seven months pregnant with twins and draped in pristine white Christian Dior couture — the house sponsored the evening — seemed game to stand and greet guests at the VIP cocktail reception (did she have a choice?), chatting up a stream of well-wishers who approached her table between dinner courses.

Seventeen-year-old ingenue Odeya Rush went over to tell Charlene that she herself has two sets of twin siblings. “Are you having boys or girls?” she asked. The princess demurred but happily chatted up the fraternal-versus-identical debate. “I’m feeling pretty good,” Charlene told WWD. “Much better than I did the first three months — those were rough. I was really happy to make the trip because I love this country and the people are so warm. I definitely hope to come back again soon.”

Master of ceremonies Jane Lynch began the show with awards for Bolshoi principal dancer David Hallberg and actor Oscar Isaac, who both previously received scholarship awards from the Grimaldi family’s foundation that enabled them to complete studies at the School of American Ballet and Juilliard, respectively.

“I left school debt-free and didn’t have to get some really crappy job to pay for anything. I got to focus on being an artist, and you guys came through,” the actor said.

The night’s final honor went to Dick Van Dyke, still spry at age 88. “If I can be of any help, I still sing and dance,” he said after busting an impressive move on stage. “In December, I’ll be 89 years old. The reason I bring it up is because I saw on the news that the new life span for men is 78.8 years, and I thought, ‘My god, I’m playing with house money.’ ”

Meanwhile, Donna Karan was in Culver City to receive an award from the Philanthropic Society Los Angeles at its annual Autumn Party. “I could live in L.A.,” she mused. “We don’t tell that to New Yorkers.” A friend pointed out, though, that “DKLA” wouldn’t have the same ring, but the designer countered, “I’m a beach girl.”

Surrounded by her “BFFs forever” — Demi Moore, Barbra Streisand and James Brolin — Karan was honored for her work with Urban Zen while Jessica Seinfeld, who brought Gwyneth Paltrow along as her date, got an award for her Baby Buggy organization. Husband Jerry stayed back in New York to watch the kids.

Paltrow proved press-shy, but perhaps she was all talked out after a busy afternoon at the Academy of Motion Picture Arts and Sciences’ Hollywood Costume Luncheon.

Taking it easy, the actress spent the night sipping white wine from a cozy couch with her gal pal. Later in the night, a crowd that included Chloë Grace Moretz, Angela Lindvall, Amanda Crew and Claiborne Swanson Frank heard Moore recall a trip with Karan to the Hamptons in 1996. It just happened to be the same weekend as a major hurricane. “[Donna] said, ‘We immediately need to jump in the Jeep, go to the sand dunes, jump in the ocean and get as close as possible,’ ” the actress said. “I am so grateful that I went to the water’s edge and I took off my clothes and I had the full experience of the beauty of Hurricane Bertha.”

“You should have seen her on the beach,” Karan called out.