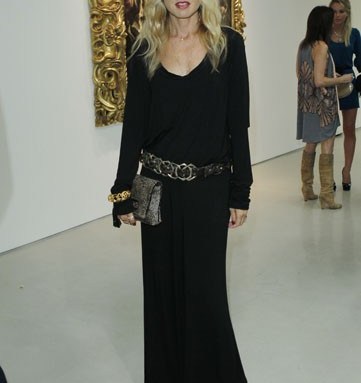 The hipster art crowd that turned out for the Prism gallery’s exhibit “Misericordia” (Latin for “mercy”) Friday night was confronted by 15th century altarpieces as well as modern images of pain and penance, but whether or not anyone understood the nuances of the show was uncertain. At least gallery owners PC Valmorbida and Jared Najjar hired the right people: the show was curated by Pace Gallery director Birte Kleemann and featured works from 27 artists including Marina Abromovic, Bill Viola, Chris Burden and Louise Bourgeois. Juliette Lewis and Anthony Kiedis actually looked at the pieces, but the 100-degree heat sent most people outside to the breezy rooftop and bar, where PYTs with names like Amber and Summerly smoked and sipped white wine. The after-party, held at the modernist Goldstein House, drew more of the same crowd plus Mia Maestro (who just finished recording her first album in Iceland with Bjork’s producer) and Elodie Bouchez (who just shot Tess Giberson’s Spring 2011 campaign).

“I didn’t think there would be cameras here tonight,” said Maestro, who clearly has been on a glacier and away from Hollywood for too long.