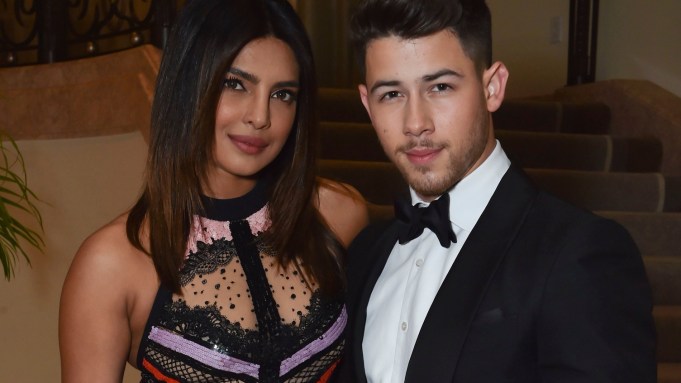 Newlyweds Priyanka Chopra and Nick Jonas took a break from globetrotting Thursday night to honor another power couple, their dear friends Elizabeth Chambers and Armie Hammer. The occasion? The Learning Lab Ventures Winter Gala in L.A. celebrating the couple’s philanthropic contributions to the foundation that focuses on providing educational programming for the city’s underserved communities.

“You are all here because you contribute and take your responsibility seriously,” Priyanka Chopra Jonas (as she introduced herself) told the stylish crowd at the Beverly Hills Hotel, where the Farfetch-sponsored gala guests included Laura Dern, Kate Bosworth, Maye Musk, Rachel Zoe, Patricia Arquette, Crystal Lourd, Eric Buterbaugh and others.

She went on to explain that she first met Chambers and Hammer at the same Met Gala table where she met her hubbie, Nick, (that must have been some table). The couples grew so close that one of the Chambers-Hammer children was a flower girl at the Jonas wedding. “We have a responsibility to leverage our position and privilege to give back because we can,” said Chopra Jonas, praising her friends’ generosity to the cause.

“I feel like we haven’t given enough,” Chambers countered, taking the stage in a silver sequin Roland Mouret gown. “There is still much to be done,” Hammer added.

Underscoring the thought, Rochelle Gores Fredson, who founded Learning Lab Ventures, shared a sobering statistic: “One in four children in Los Angeles is living under the poverty line.” But by participating in after-school programs and enrichment, hundreds of students are being helped, she said hopefully, adding that it is her mission to break generational poverty. “One family at a time, you are making Los Angeles a better place,” honoree Irena Medavoy said of Gores Fredston and her work.

“Having long term educational support from Learning Labs is what makes the difference in children’s lives and helps them become college graduates,” said one of the evening’s supporters, fashion entrepreneur and consultant NJ Goldston, whose Athletic Propulsion Labs (APL) brand donates sneakers for students in LLV programs.

Hollywood connector Irena, who is married to film producer Mike Medavoy, was the reason Angela Sarafyan came out for the gala. “She’s an incredible person and I love how generous and kind she is,” said the “Westworld” star, dressed in Monique Lhuillier, noting that the gala, which included such starry silent auction items as a private dinner with Jamie Foxx and Leonardo DiCaprio, was a “perfectly Hollywood evening.”