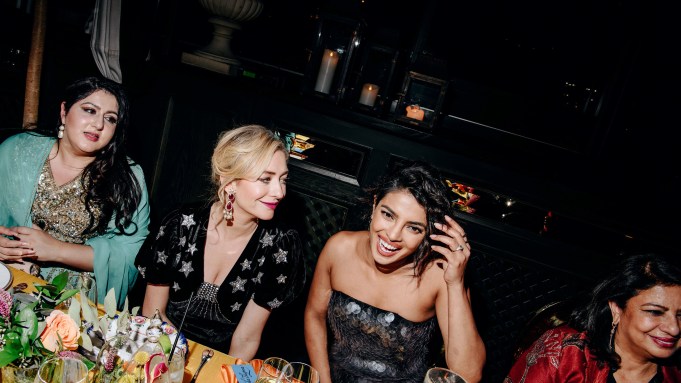 Bumble is one busy bee. A year after launching its professional networking mode Bumble Bizz, the app has set its sights on an even bigger market: India. And it has Priyanka Chopra to thank.

Seated next to Bumble founder Whitney Wolfe Herd the year before, Chopra — who’s since become an investor in the business — had told the tech entrepreneur: “We need to take this to India.”

“Whitney and I were talking about it when we were at [the Bumble Bizz launch] dinner, and we just sort of got on in terms of our philosophies as women,” said Chopra from Gramercy Terrace, where the pair were hosting a dinner party for the launch of Bumble India. Bollywood songs played overhead, and the table was decked in opulent shades of yellow, orange and pink. “We’re both from different countries, but we met in the same place, which was coming from a privileged background where our parents gave us the ability to make choices about our own lives — that makes us privileged. Many, many women around the world don’t have the right to make decisions in their own lives,” she added. “It’s an incredible empowering tool for modern women today who are finding their voice, who are saying, ‘I’m not going to stand for people making decisions for me, and I’m not going to stand for staying quiet — this is my world now.'”

Chopra was out for the second night in a row; the previous evening, she had celebrated her upcoming nuptials to Nick Jonas with a bridal shower at Tiffany & Co. on Fifth Avenue. She may not personally have use for the app’s dating platform, but pointed to the app’s offerings as a whole — not in the market to date but looking for new friends or professional connections?

“Dating is not something that happens very often in India; it’s not the norm, you don’t date multiple people — you date one person, you like them, you date them a couple of times, and then you get into a relationship,” Chopra added. That is why Bumble is going into India as a social network on the whole.…If you’re engaged or married, you can completely delete off Bumble the dating site and you can only have Bumble Bizz and Bumble BFF because that’s what you want to do.”

“We just saw such a unique opportunity and we were, like, ‘This is the moment to do it,'” Wolfe Herd said before dinner. “The thing is, American culture four years ago wasn’t really so different in terms of archaic thinking. This is pre-#MeToo, pre-Time’s Up — all of this. We were three years early to really promoting women to being in control, being in the driver’s seat, making the first move.”