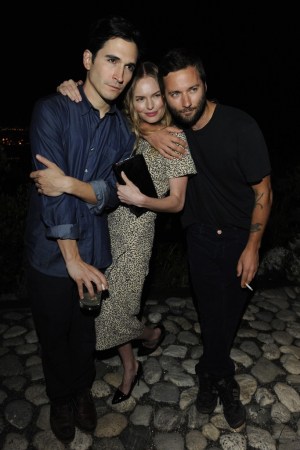 Lazaro Hernandez and Jack McCollough made a stop in Los Angeles Thursday to celebrate Barneys New York’s reissue of their first collection on the West Coast. “Two parties, two coasts, three days, good times,” said McCollough. Guests at the party, held in the Hollywood Hills home of Sotheby’s Tobias Meyer and art consultant Mark Fletcher, took in vistas of Universal City to the north and Catalina Island to the south, not to mention of the house itself, a wood and glass box framed by a swimming pool in the front.

“It’s an original swinger’s house, built by architect Donald Hensman in 1977,” said Fletcher of the modernist home on Mulholland Drive. “You can imagine what went on in this bachelor pad back then. It’s only suited for one person or a couple, but it’s great for a party.”

The informal dinner managed to attract a majority of males, a rare occurrence for a fashion party.

“Well, you’ve got to mix it up a bit,” said McCollough of the bearded crew of hipster guys. The Proenza-clad females, including Kate Bosworth (who was one of the first to arrive with fiancé Michael Polish), Kirsten Dunst, Gia Coppola, Nathalie Love, Angela Lindvall and Rashida Jones, didn’t seem to mind, even when one male guest couldn’t resist jumping in the pool. He later donned a towel over his wet briefs.

“I’m not getting in the pool, but my dress is like a really comfortable bathrobe,” said Bosworth of her French terry frock. While Jones and Hernandez snapped self-portraits on Jones’ phone, Dunst caught up with Coppola, who recently wrapped her first feature film, “Palo Alto.” As for Dunst’s next project, she said, “We’ll see. I try to be very selective about the movies I do, so I don’t know what’s next yet.”

Next up for Hernandez and McCollough is a runway show in China. “We’re showing our fall collection in Beijing’s Forbidden City,” said McCollough. “We’re really trying to build our business in China and we want to show them what we can do.”