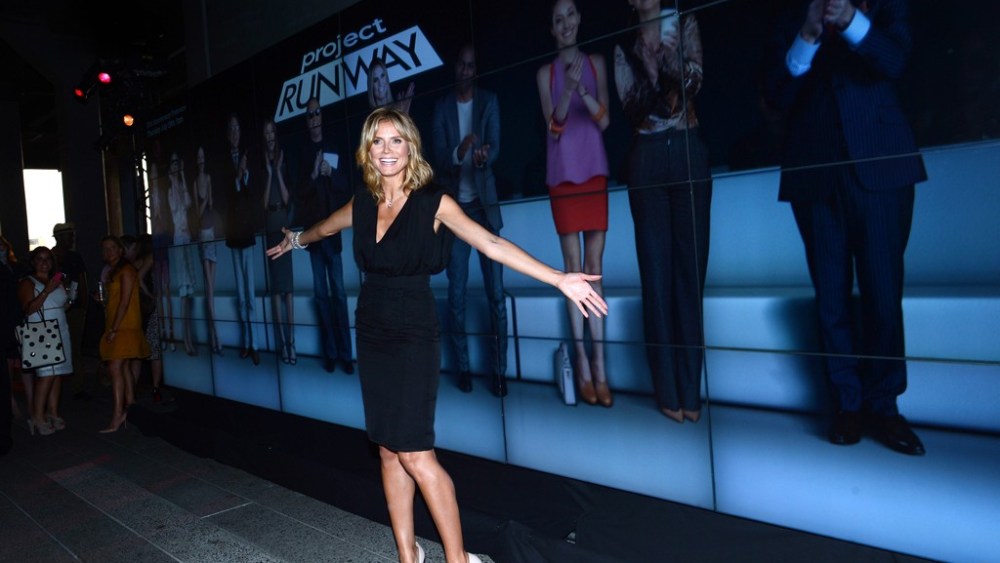 At a party celebrating the upcoming 10th season of “Project Runway” on the High Line in New York on Tuesday night, some found out the hard way that Michael Kors can be a tough judge off the small screen, too. A virtual runway was assembled that allowed passersby to strut their stuff and receive feedback from a simulated video panel of judges (namely Kors, Heidi Klum, Nina Garcia and Tim Gunn), who appeared to be judging from the front row in real time.

“They filmed us separately, these little clips of our reactions on a green screen,” Klum explained. “So you know, Michael will be like whispering in my ear. I’ll have a thumbs-up or thumbs-down. So when people walk by you’ll see if we’re shaking our heads or if we get up and clap.”

The party, marking the show’s 10th season, not only drew curious runway strutters but previous contestants as well.

“Everyone is getting something back from being on the show,” said Klum, who was clad in a sharp little black dress. “It’s been a little bit of a jump-start for everyone in their own way.”

She cited Christian Siriano, Mondo Guerra and Chloe Dao as particularly successful former contestants — Siriano with a store opening in the fall, Dao with a line for QVC and Guerra with upcoming sock and eyewear lines. Gunn noted the consistent flow of talent season after season as well as of over-the-top personalities.

“What I love about the show is that there’s never a dull moment,” he said. “Someone asked recently, ‘Where do you find these people, and how is it that they’re such big personalities?’ I was with Michael Kors when this happened, and he said, ‘Do you know the fashion industry? It’s hard to find a shrinking violet.’ And that’s very true.”

It takes a certain type of person to want to be on a reality TV show, that’s for sure. When asked if she would have competed on “Project Runway” when starting her own career, Stacey Bendet of Alice + Olivia said, “I would have been really nervous! Even at our shows, I like to be behind the scenes. I don’t think I’d have been bold enough to actually go on TV.” Nanette Lepore piped in: “It looks so frightening.”

As for the new season, which premieres Thursday night on Lifetime, Klum gave a preview: “We had two people that left early, which was quite a shocker for all of us. We didn’t even know what to say.”