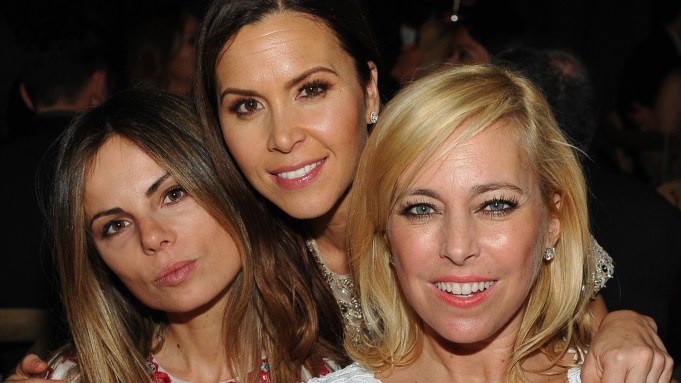 On Saturday, Rochelle Gores Fredston and Philanthropic Society Los Angeles hosted its first Winter Gala (the annual fund-raiser was formerly held earlier in the year and titled The Autumn Party) to raise funds for Children’s Institute, Inc. and honor art patrons Sutton and Christian Stracke and artist Mark Bradford for their work on behalf of the nonprofit.

“I wanted to do something fun,” said Gores Fredston of the lavish affair, held at her father Alec’s Beverly Park estate. While the gala had the trappings of a pricey fund-raiser (e.g., a silent auction, a Champagne-fueled cocktail hour, a steak dinner in an upscale tent on the lawn), there were some surprises, like rock star violist Lee England Jr. performing between the dinner tables and a surprise appearance from actor Tobey Maguire.

Instead, she hosted a bunch of PYTs at her tables, including Holland Roden, Angela Lindvall and Erica Pelosini. Other guests included Tyrese Gibson, Frank Gehry and Gelila Puck, who connected PSLA with Gehry and the pro-bono school campus he’s designing in the Watts Projects.

While Gehry didn’t take the podium to present the Strackes with their award, Los Angeles Ballet dancer Jasmine Perry did the honors (Sutton Stracke is a former dancer with the Augusta Ballet and a patron of several ballet companies). “Sorry, I’m not good at speech-making,” said Sutton Stracke. “I’m a dancer, so I’m going off-script.”

Bradford, who started his own foundation to help at-risk youth called Art + Practice, stuck to his script, which was equally sincere.

“I do feel like artists often stand on the side of society and poke at it and question it. If we do become successful we are welcomed into the center of culture, with everyone saying, ‘We always knew you could do it.’ But when you are struggling in the shadows, that’s when you need the most help, and that’s what Children’s Institute is doing. I struggled as a kid, and when someone shined the light for me I remembered that and I wanted to give back.”