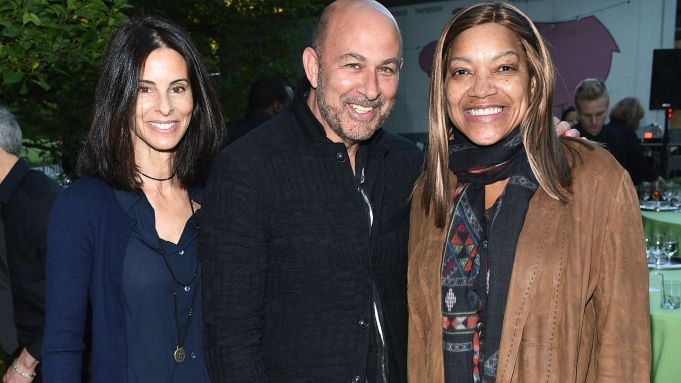 “Twenty-one years ago — 21 summers ago — I got my Equity card at the Delacorte Theater,” said Jesse Tyler Ferguson on Monday night, cloistered among the dinner tables set up for the Public Theater’s annual gala in Central Park. “I was 21, as well,” he continued. “It has really truly shaped me as an artist; some of my favorite memories as an artist have been at this theater. I remember doing ‘On the Town’ and competing with five helicopters that were hovering over the Delacorte Theater, trying to get footage of the Garth Brooks concert that was playing 10 blocks north. It was like I was in a production of ‘Miss Saigon.'”

Claude-Michel Schönberg and Alain Boublil’s musical has yet to make it to the Delacorte’s outdoor stage, but Elizabeth Swados‘ “Runaways” did, if only for two nights, as this year’s gala performance.

“It’s such a New York institution, and I’ve never done a play [there],” said Glenn Close, making her way to join Ethan Hawke, Chelsea Clinton, Claire Danes and Hugh Dancy at the preshow dinner. “I’ll be doing one this fall, so it’s very exciting for me; it’s like the final rite of passage.” (Close will star in the North American premiere of “Mother of the Maid” in September.) In the meantime, she listed off some personal highlights from past Public Theater productions at the Delacorte.

“I mean, I can go all the way back to Meryl [Streep] doing ‘Much Ado About Nothing’ and Raúl Juliá and Ellen Greene, Bill Hurt,” she said. “For me, it marks one of the greatest theatrical institutions of the city.”

First up in this year’s Shakespeare in the Park series is “Othello,” which runs through June 24 and stars Chukwudi Iwuji in the titular role.

“It’s a dream come true, really. There’s nothing like the park, and there’s no stage like the park,” said Iwuji. “There’s this x-factor that is nature, and the trees, and the wind and sometimes it feels like nature is listening to you,” he added. “It’s kind of weird how the wind blowing through the curtains in the background in the middle of a death scene, or even a bit of rain, and people sitting through rain…it’s magical, it really is.”

Out With a Bang: Inside the Tony Awards After Party at The Plaza