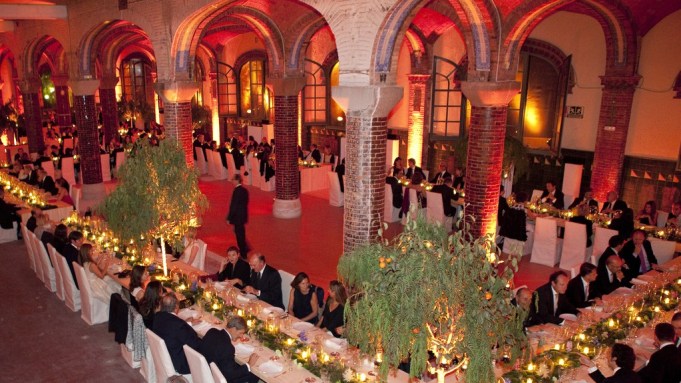 BARCELONA — Is Shakira, five months’ pregnant with her second child, ready for something other than maternitywear?

Sensible shoes were not even a consideration. “Over my dead body,” she said. “I’m the type that goes into the operating room with makeup on — against doctor’s orders.

“He’s the problem,” she added about her footwear choice, looking up at her strapping husband Gerard Piqué, a soccer player with FC Barcelona. “He’s just too tall.”

The singer was among a host of VIPs, retail bigwigs, master perfumers and brand executives who descended on this Spanish city Wednesday night for the “closing ceremonies” of the fragrance and fashion group’s anniversary festivities.

Almost Olympian in scale, the evening opened with a multimedia presentation in the Gran Teatre del Liceu and climaxed with a cocktail, dinner and dance party at the former Hospital Sant Pau, billed as the largest Art Nouveau complex in Barcelona and a UNESCO World Heritage site.

Retired Australian rugby player Nick Youngquest, he of the toned pecs and bulging biceps in the Invictus perfume commercials for Paco Rabanne, strode into the party in a black Hugo Boss suit and had everyone clamoring for a selfie with him.

Like Shakira, he also errs on the chic side and recently took to Twitter to condemn tracksuit pants in public.

Here’s the backstory: “I’m boarding a plane from Amsterdam on a Sunday afternoon and I swear, 75 percent of the passengers were in track pants,” he said incredulously.

Now based in New York and modeling for several brands, Youngquest is also finishing his business degree online.

Paco Rabanne, after stopping to sign an autograph outside the Liceu, said he’s nonplussed by the recent comeback of Sixties fashions. “Fashion works on 15-year cycles. Everything comes back,” he shrugged.

During his presentation at the gilded opera house, Puig chairman and chief executive officer Marc Puig talked about how his grandfather wore a lavender-scented shampoo — a scent that has ever since been associated with coziness and calm.

For Carolina Herrera, that comfort trigger is jasmine, which grew in the garden outside her bedroom window when she was growing up in Venezuela. “It’s a very happy memory from my childhood,” she said.

More recently, the New York-based designer encountered a woman on the street in Manhattan whose countenance — and perfume — summoned memories of her grandmother. The scent was Caron’s Fleur de Rocaille.

As a little girl, Eugenia Silva would watch her mother getting dressed for a party and spritzing on Paris by Yves Saint Laurent. “So glamorous,” she said. Silva is heading to New York with her five-month-old son for a raft of modeling assignments through Christmas.

Back at the gilded opera house, rigged with a chin microphone, Marc Puig roamed the stage and introduced a series of video clips that recounted the history of the family-owned business, which has flourished in the past decade and garnered an 8.6 percent share of the prestige perfume business.

“It’s our chance to brainwash you. The good thing is this only happens every 100 years,” he said, prompting a round of chuckles.

He and his cousin, vice chairman Manuel Puig, paid homage to the second generation of family members — Antonio, Mariano and Jose Maria — who gathered on stage and received a standing ovation.

Puig’s anniversary activities began in April with 1,200 employees gathering in Barcelona for the unveiling of its tower and an Assouline tome titled “100 Years of a Family Business.”

News of the milestone even reached small fishing villages. Marc Puig related that he ran into one of his senior executives in one such village and met his 10-year-old son, who was stupefied at the encounter, explaining his silence later to his father: “He looks so young for someone celebrating his 100th birthday.”

Puig said he, Manuel and the management team are “preparing the fourth generation” and stressed the company in the future would be greener and more socially conscious, pledging 10 million euros to be dispensed in the first quarter of 2015.