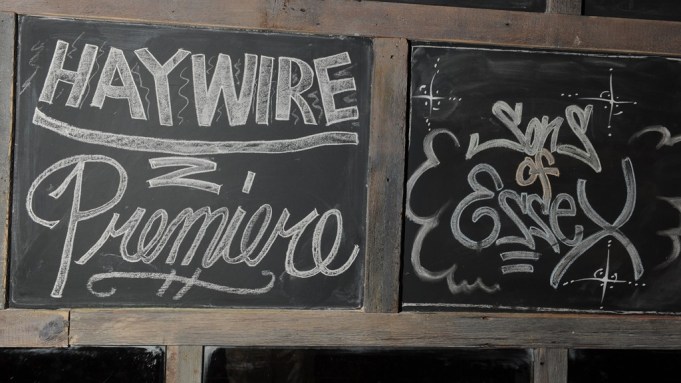 On Wednesday night at the Lower East Side restaurant Sons of Essex, Gina Carano, newly minted action star and one-time professional mixed-martial-arts fighter, was looking less than capable of bodily harm. The budding actress’ major movie debut, the Steven Soderbergh-helmed “Haywire,” had just shown around the corner at the Landmark Sunshine Theater at a screening hosted by the Cinema Society and BlackBerry Bold. In the film, Carano kicks, punches and grapples her way through several continents and a handful of leading men, but in the booth she occupied with Soderbergh and co-star Ewan McGregor, she was subdued. The former cage fighter (professional record of 8-1, with three knockouts) sported a little black dress covered with a matching jacket and said she was enjoying the premiere scene thus far.

“I like to get dressed up,” she said with a shy smile.

“Oh god,” she said breaking into a laugh when asked for the make on the dress. “I’m wearing Bebe.”

A crowd of assorted New York-screening-circuit regulars, including Tony Danza, Gina Gershon, Jessica White and Stephen Baldwin, filled out the rest of the restaurant. At the bar, Elizabeth Banks took a break from chatting with Justin Bartha to discuss the politics of female fighting.

“I only fight when I have the moral high ground or I’m fighting for my family,” Banks said. “Also, I’m small and I’m Irish, so I fight very dirty. I gotta be honest with you — I was disappointed that she didn’t bite anybody, rip anyone’s eye off, stick her hands down someone’s throat to choke them out. I would have gone in and grabbed the vocal chords and ripped them. And she didn’t go for any ’nads. As a female fighter, I find that unbelievable, frankly.”

Perhaps she’d care to take all of this up with Carano?

“It’s never going to happen,” Banks laughed. “She seems like a lovely person.”