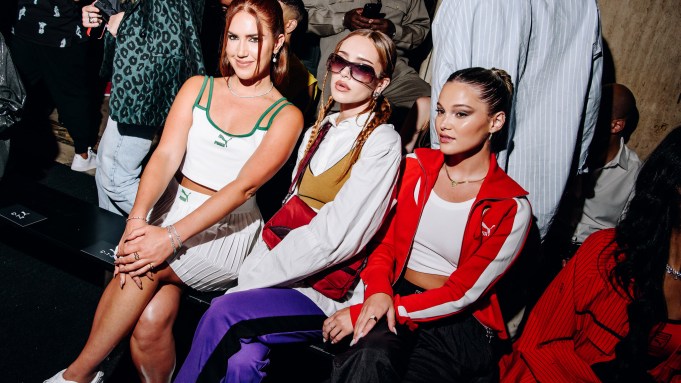 The room was unusually quiet pre-show as guests found their seats. Brooklyn Beckham was seated next to Dixie D’Amelio, sporting a new pixie cut, with NBA Hall of Famer Walt Frazier two seats down the row. Other guests included Cordae, G-Eazy, Babyface, Tinx, nightclub entrepreneur Richie Akiva — who’s been hosting some of the week’s most exclusive private events — Robin Thicke, Olivia Holt and Dapper Dan. Newly signed Puma ambassador and music producer Skepta was taking in his debut for the brand: a video voiceover and show soundtrack.

Afterward, the music — a lot of nostalgic hits from the Aughts — turned way up, and the reflective boulders flanking the runway stage turned into a photo prop as the crowd climbed onto the set for the after party. Dapper Dan made his way slowly toward the front of the venue, stopping every few steps to chat with friends and fans alike. While the front-row VIPs had mostly left the building, the after party MVPs turned out to be the show models themselves, who could be seen enthusiastically dancing with Champagne in hand. Outside Cipriani, a fleet of black SUVs stretched up Broadway, waiting for the crowd to call it a night.