Co-hosted by Zac Posen and his line Z Spoke, the party on the 18th floor of the Standard Hotel did not disappoint. 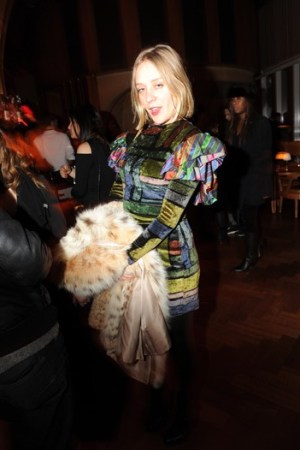 Purple Magazine is known for throwing a wild party, and Saturday night’s ‘do on the 18th floor of the Standard Hotel did not disappoint. Co-hosted by Zac Posen and his line Z Spoke, the designer was present and accounted for, as was his branding — splashed across the windows of the vertigo-inducing bathrooms. Posen shimmied energetically in a booth with friends, among them Constance Jablonski and Lily Donaldson. Irina Lazareanu chatted up Max Snow as Stavros Niarchos, PC Valmorbida and their merry band of blond friends bandied their bottles of Belvedere about. Mary Kate Olsen gave photogs the slip as she darted into the their booth and was greeted warmly by all.

Chloe Sevigny did not seem particularly interested in the mélee or most of the shows, explaining that she was attending, “Imitation of Christ and Proenza. That’s it,” before turning back to the crowded bar and waiting to be served.

Waris Ahluwalia and Leigh Lezark got stuck together in the perpetual conga line between the two bars, as Michelle Trachtenberg and Sophia Bush attempted to move in the opposite direction.

Alexander Wang and ever-present crew were celebrating Wang’s much-lauded show that afternoon, dancing like maniacs and throwing their limbs every which way. Miraculously no drinks were spilled. A tribal-poncho sporting Jared Leto was under heavy guard at Le Bain, but later ditched the suited security men and posed for pictures, complaining to no one in particular, “Why is my ex-girlfriend here?!” before waving to a departing Anouck Lepere.

The crowd seemed to multiply exponentially with each passing hour, and Jason Wu and Erin Wasson were near the coat check when one model-esque reveler had had enough, punching a petite female guest in the face like she was an extra from “The Fighter.” Not everyone was so bothered by the clamoring crowds. Yigal Azrouel and Rose McGowan both grooved along to the music unperturbed, as Nate Lowman and Olivia Munn conversed complacently in a corner. The party continued until around 4am, with partygoers spilling out into the streets of the Meatpacking District in search of taxis, eager to catch what little sleep they could before the next morning’s shows.