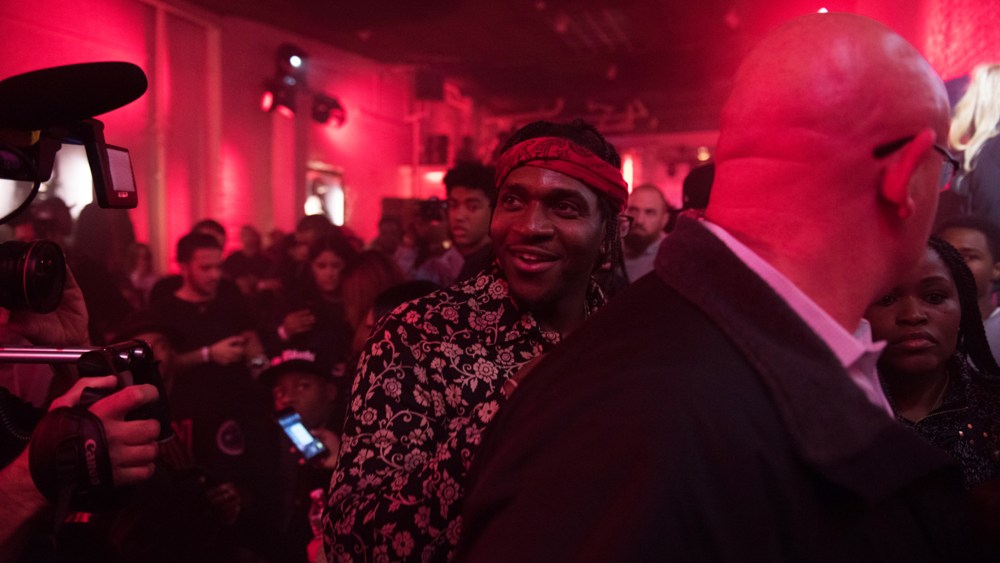 Pusha T looks right at home on a throne.

That’s where the rapper conducted a string of press interviews on Thursday night at an event in New York City that celebrated his second sneaker with Adidas Originals and offered an exclusive first listen of his unreleased sophomore album, “King Push.”

The “Black Market” EQT Guidance Running ’93 sneaker, which retails for $200 and will be available on Black Friday, Nov. 27, is a black version of his first sneaker with Adidas, the Chalk White EQT. The sneaker features elevated materials including cracked Italian leather and a fish-scale heel counter.

Pusha T told WWD that much like the Chalk White EQT sneaker, which referenced his drug-dealing past, the Black Market theme felt in line with his brand.

“We knew we were going with a black colorway, so we were just playing off that,” he said. “Black market and underground are words that are sort of synonymous with hip-hop. It’s just real shady. My music is really shady and really dark and really raw.”

According to Pusha T, the sneaker’s packaging is inspired by bootleg merchandise and will come packaged in black plastic bags with rubberband ties.

Like most of his counterparts in the music industry, he has closely aligned himself with the fashion business. In addition to his Adidas partnership, he has two streetwear stores in Norfolk, Va., named Creme, and his own line, Play Cloths, which he founded with his brother and Clipse group member No Malice in 2008.

“With Play Cloths we are seven years in and it’s definitely a priority. I feel like we just had our best two seasons and we are sort of expanding and opening up new doors,” said Pusha T, who said the line started in 30 doors and is now in 150. “We did the boutique thing initially when we started off, but I feel like it’s time to grow. I mean, I’d love to be in Macy’s.”

The rapper is also busy on the music front. Earlier this week he was named president of Kanye West’s record label Good Music, whose roster of artists includes Q-Tip, Big Sean and John Legend. West has stepped down from the position and passed the proverbial torch to Pusha T, who believes he will be able to foster camaraderie within the label.

But will West really relinquish control?

“Never,” Pusha T said. “He always has input. But I feel like my job is to take on lot of the legwork and make decisions.”