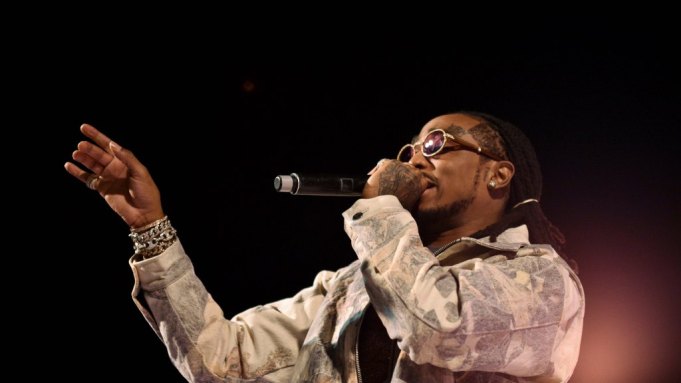 “I see a hand in the back,” yelled Jamie Foxx in fine form, microphone in hand, as master of ceremonies at A Sense of Home’s inaugural gala on Friday night in Los Angeles. “Stop, stop,” he added, facing the DJ on stage as the music — The O’Jays’ “For The Love of Money” — slowly faded away. “$100,000. A wolf is in the building. A wolf is in the building, and he said $100,000. And he’s a very talented wolf, a very good looking wolf.”

It was Foxx’s “Django Unchained” costar, “The Wolf of Wall Street” actor Leonardo DiCaprio, who had made the donation. Dressed down in his habitual cap, paired with a black T-shirt, jeans and sneakers, the Oscar winner then disappeared into the crowd and returned to his usual m.o. at parties, keeping low-key and shying away from cameras.

“If we can raise $250,000 in the next hour, I will match it,” had announced host Gary Gilbert, standing in his own backyard. The Gilbert Films founder had opened his home, a Georgian-style property in The Flats of Beverly Hills, for the occasion, which cost $1,000 a ticket. “Let’s see if we can raise some money.”

The charity, created by Melissa Goddard and Georgie Smith, works to provide former foster youth who have been aged out of the system with the basic needs that make a home by supplying recycled household items. It was formed in September 2014 after Smith received a Facebook message from a young man needing help. He had seen a video that had been posted of Smith transforming her friend’s backyard into an outdoor living room and reached out, on a whim, to see if she would give him a hand. He had an apartment, via subsidy of the government, but nothing else.

“He was living on the floor,” said Smith, who’s originally from Australia. “He didn’t have a fridge. He didn’t have a chair or a plate to eat out of.” She and Goddard took action, asking friends for hand-me-downs.

Five years and 500 homes later, they’ve created a model they hope to scale across the country and the world, she shared. “Thirty percent of the homeless population is these aged out foster youth,” she added. “That’s the largest portion. If we simply share what we have too much of, because there is enough to go around.”

“Ted Sarandos and I have a few things in common,” said Levy, who’s a co-chair with his wife Serena. “We’re both in the entertainment business. We both love storytelling and a chance to empower creative voices. We haven’t discussed this, Ted, but I think we’re every day a little grateful that we’ve somehow held on to solid heads of hair in middle age. And most of all, though, we both married way, way out of our league. I think that’s safe to say.”

When she accepted the honor, the former U.S. ambassador to the Bahamas thanked the organization’s team and the crowd for showing up. “I’m going to keep this brief,” Avant said. “As humans, the most important thing we all want is to be valued and to be seen and to care for each other. I think that’s our job on this earth, regardless if you disagree on different things, politics, what have you….We are very grateful and very humbled. Teddy, would you like to say something?”

“I would only say that I learned a long time ago to let you do the talking,” he responded to laughs.

Before leaving the stage, the ambassador gave a special shoutout to Irena Medavoy.

“I would not have known about A Sense of Home, and I think I can say this for Jena [King] and a few other people,” she said. “Irena Medavoy is really the driving force behind A Sense of Home and all of us.”

“Those two are angels,” Medavoy, a philanthropist, entrepreneur and relative of Goddard’s, said in return. “I had a party at my house for Christmas. Nicole took out a check and said, ‘What do you need?’…And on a cellular level, it’s all about Georgie and Melissa. They took everybody in.”

The night, which raised more than $500,000, ended with a performance by musical group The War & Treaty, singer Tyrese Gibson and Quavo of Migos.

“I get calls every day, and this one stuck out, and it made sense,” said the rapper moments after he stepped off the stage. “It’s for an important cause. I see what they’re doing. I grew up around similar people who had nowhere to stay. It’s hard living on the streets, and my boys, my partners were living on the street, and my mom embraced them. That’s why I’m here.”