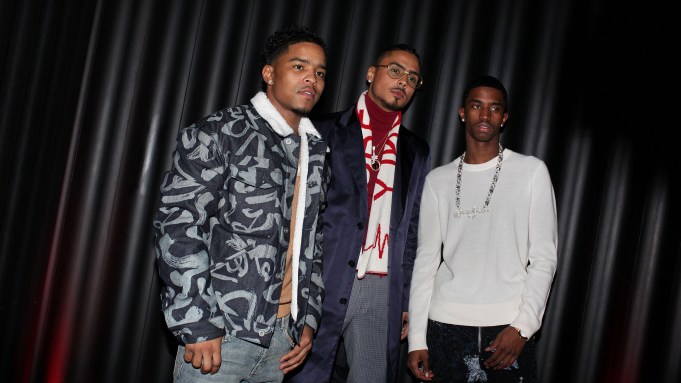 Christian Louboutin is riding the wave of its brand clout within the hip-hop community. After getting shout-outs in songs from Cardi B, Kanye West and Lil Uzi Vert, the company is tapping young influencers of color from the world of rap. Enter Quincy Brown, somewhat of an entertainment royalty figure. He’s the adopted son of Sean “Diddy” Combs and his mother was the late model Kim Porter; he’s also an R&B musician (his biological father is R&B crooner Al B. Sure) and an actor, appearing on the Fox TV series “Star.” And on Tuesday night, Brown unveiled “Run Loubi Run,” the short film he created in collaboration with Christian Louboutin for the brand’s latest iteration of sneaker, at a party on the rooftop of the Public Hotel.

Charlotte Lawrence, Maluma, Christian Combs, Winnie Harlow and more came to the party, where guests danced to pulsing music and posed for pictures. Vic Mensa made his way to the VIP area, where model Juana Burga, who’s featured in the video, sat cradling her drink.

Burga said Brown’s family, including Diddy, brother Christian and his twin sisters Jessie and D’Lila, stopped by the set while they were filming the campaign.

“I wish I could work with my relatives,” she laughed.

Brown said he benefited from explaining the details to his 12-year-old sisters, because he started to understand his own vision in a new light.

“They haven’t seen many sets before, so when I was trying to explain the concept to them, they were questioning things like, ‘Well, how are you going to do this if that’s right there?’ I’m like, ‘It’s magic,’” he said. “They’re so literal with everything. So if you say something that slightly doesn’t make sense, they’re going to call you out on it. But that’s actually fun, because I get to hear myself teaching what I know. And then I can learn about it. That helps the process.”

Brown, who juggles acting and making music simultaneously, said expressing his emotions and experiences cannot be contained to just one medium.

“There are two separate passions that make my clock tick,” he explained. “With acting, I’m able to tell stories, but that’s not necessarily me — but it is me, if you understand what I’m saying. Being able to have a personal outlet like music, it creates another layer of the public getting to know me, who I am as a person.

“I’m moved by so much and I don’t want to come shy of anything.”

Natasha Lyonne Has More Layers Than a Russian Nesting Doll

Jess Connelly, a Musician From the Philippines, Sidesteps Typical Stardom