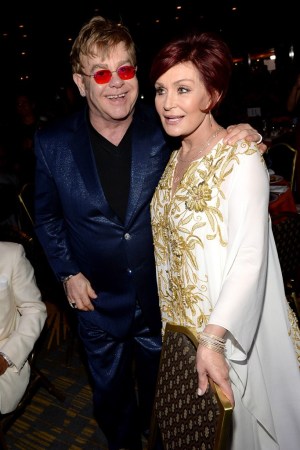 “The only reason I’m doing this tonight is that Sharon Osbourne has so much information on me that I couldn’t say no,” said Sir Elton John, who was billed as the top performer alongside Taio Cruz at the 20th annual Race to Erase MS Friday night at the Hyatt Regency Century Plaza Hotel in Los Angeles. The singer performed a one-hour set that included “Tiny Dancer,” “Your Song” and “Rocket Man” in support of friends Jack Osbourne and Sharon Osbourne, who were honored with the Medal of Hope award for bringing awareness to multiple sclerosis. The night raised $1.8 million for philanthropist Nancy Davis’ foundation.

Jack Osbourne was diagnosed last year and admitted he was initially reluctant to accept the recognition. “It was bittersweet. I was like, ‘Can’t you honor me for not having MS? I’d rather that.’ Of course, I have to accept it. This is a fight far bigger than myself, far bigger than anyone in this room,” said the 27-year-old.

This story first appeared in the May 7, 2013 issue of WWD. Subscribe Today.

In true Osbourne fashion, he lightened the mood. “This is like the bar mitzvah I never had…and I have my own pimp cup now,” he laughed, while holding the goblet-shaped award.

Previous years featured a celebrity fashion show from Hilfiger (whose sister has been living with the chronic neurological disease for about 26 years), but some attendees confessed they felt relieved not to be walking for their supper.

“The first time I came to this event I was modeling in the fashion show, which was so nerve wracking. Now I can just sit back, relax and enjoy it,” said Cavallari. “I’m glad I’m staying in my own dress,” echoed Heche.

Others, like LaToya Jackson, expressed excitement over the performances. Her favorite Elton tune? “‘Benny and the Jets.’ I remember that song so well from school because Kathy Hilton and I used to sing it in class all the time. Mike [as in her brother Michael] used to say, ‘Kathy, will you be quiet? You’re going to get us in trouble.’”