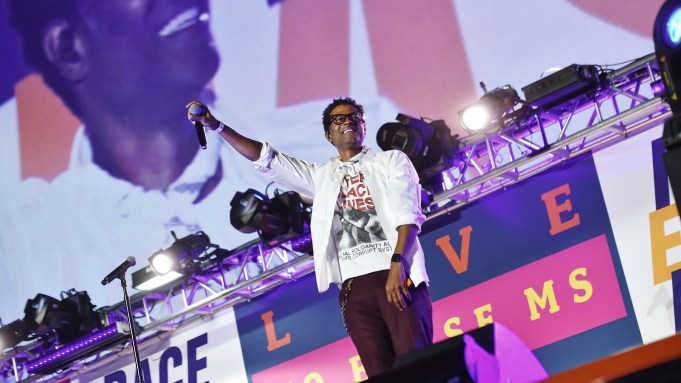 While most events in Los Angeles this year have either been canceled, postponed or gone virtual due to the health crisis, Race to Erase MS opted to host its annual gala as a drive-in. The organization, which is dedicated to the treatment and cure of multiple sclerosis, raised $1.4 million on Friday night at the Rose Bowl in Pasadena, Calif.

“Dance in your cars, pop out of your sunroofs,” exclaimed founder Nancy Davis from the stage early in the evening, looking out to a lineup of sports cars, convertibles and SUVs on a grassy lawn at the venue.

The crowd — which included Lucy Hale, Anne Heche, Victoria Justice, Katie Welch, Derek Hough, Mark-Paul Gosselaar and Logan Shroyer — arrived via a drive-through, a makeshift red carpet, where they posed for photographers from inside their cars.

The space was transformed into a tailgate of sorts, though everyone had to stay in their rides. Instead of potlucks or barbecues, it was catering courtesy of Craig’s. The L.A. hot spot served a menu that included fried chicken sandwiches and spaghetti squash primavera in individual to-go, paper boxes.

“Honk your horns, flash your lights,” continued Davis, who started the organization in 1993 after being diagnosed with the disease.

And they did, all evening. As music played, guests leaned out of their car windows, swaying and singing.

“You got super dressed up in your cars for this,” said headliner Andy Grammer, guitar in hand as he addressed the crowd. While some were in T-shirts and lightweight dresses, others wore gowns and suits, despite the summer heat. The day’s temperature had reached 99 degrees, and by nightfall, it dropped to about 80 degrees.

But the heaviness in the air was due to more than just the weather.

Still, the night belonged to Davis’ late son Jason, who passed away earlier this year at the age of 35. “We love you, Jason,” echoed family and friends, who honored him with emotional tributes throughout the evening. Though his death was ruled an accident, Davis mentioned that her son was possibly an early victim of the coronavirus.

Since COVID-19 began impacting the world, many forget about other diseases, added Davis, “diseases like MS.”

“I’ve known Nancy for almost 30 years, she’s a very close friend, and I admire all the relentless work she has done building Race to Erase MS,” said Tommy Hilfiger, who watched the gala through livestream. The designer is a longtime partner of the organization. “Thanks to her persistence and commitment, countless lives have been changed and so many positive milestones have been reached.”

“Inclusivity is one of the most important causes I am committed to,” Hilfiger continued. “I always wanted to build a global lifestyle brand that is for everyone. The adaptive collections continue to build on that vision, empowering adults and kids with disabilities to express themselves through fashion. My son is autistic, so I have experienced firsthand the difficulties of getting dressed. Everyone deserves to feel good in their clothes and have independence.”

Of the current climate, he said: “It’s been a challenging time for so many people. It’s made us stop to think about what really matters. As a brand, we are committed to environmental and social sustainability. Our ongoing mission is to create fashion that wastes nothing and welcomes all, and this has never been more important than today.”