Makeup artists and actresses came together for a good cause. 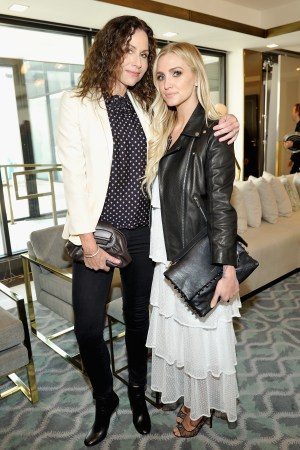 On Thursday, Dior Beauty celebrated what are probably among the longest relationships in Hollywood — those between an actress and her makeup artist — at its eighth annual luncheon benefiting Operation Smile in the penthouse of The London West Hollywood.

Anna Gunn, who was given a bright spring makeup look for the event by her beauty pro Leah Rial, suggested the keys to a lasting makeup artist-actress match are sharing similar aesthetics and a rapport. “We were great friends from the get-go. It’s about feeling comfortable, and that you are in good hands,” she said. It also helps if you can take some teasing from your beauty buddy. Joking about Gunn’s undying love for her favorite lip enhancer Dior Addict Lip Glow, Rial said, “If there is an apocalypse, she’s going to be carrying that in her hands and using it to scrape her way out of it.”

Other attendees, including Katharine McPhee, Sabrina Bedrani, Kate Walsh, Rachel McAdams, Minka Kelly, Judy Greer, Minnie Driver, Ashlee Simpson, Troy Jensen, Emily Robinson and Ashley Madekwe, swapped product recommendations (Robinson confessed a weakness for lip glosses, especially pale pink Dior Addict shades), and tales from inside and in front of the makeup chair. Greer recounted, “One time, I was in the chair getting ready, and the boy next to me in the trailer I kind of had a crush on. My makeup artist said to me really loudly, ‘Do you want me to pluck this hair out of your chin?’ We didn’t get involved, and I’m kind of feeling that might have been the reason.” Jensen’s Björk story from the Academy Awards in 2001 was a topper. “She invited me to her hotel room prior to the Oscars, and she pulled out these two big boxes. From the first box, she pulled out a black swan, and I didn’t really understand she was going to wear it. I thought she was going to hold it,” he recalled. “From the second huge box, she pulled out a white swan, and I said, ‘If you are going to do a swan, you should do a white swan.’”