Rachel Weisz Gets a Gut Check at ‘Whistleblower’ Premiere

The actress walked the carpet for her new film, as did Kathy Bolkovac, the U.N. peacekeeper she plays. 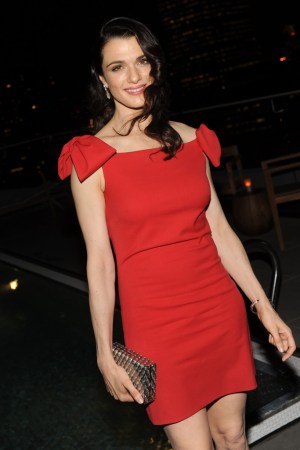 The subject matter — sex crimes, human trafficking, corruption, et. al. — was rather dour at Wednesday night’s Cinema Society and Dior Beauty-sponsored screening of Larysa Kondracki’s ‘The Whistleblower,” though some attendees tried valiantly to keep it light.

“Is it depressing?” the film’s star Rachel Weisz asked rhetorically. “I’m sorry! It doesn’t have a happy ending, that’s true. But you know, it’s still going on, so you couldn’t just tie it up in a little bow.”

The film is inspired by the experiences of Kathy Bolkovac, a United Nations peacekeeper in Bosnia who, after discovering that some of her colleagues were involved in human trafficking, risked her job and her life by, well, blowing the whistle. Bolkovac, also at the screening at the Tribeca Grand Hotel, was a bit taken aback by her current situation.

“It’s surreal,” she said, shrugging off suggestions of heroism. “I live an everyday life. I did what I did back in Bosnia because I felt it was my social responsibility. That’s really all there is to it.”

“I’m not an activist, I’m an act-ress…” Weisz said with a grin when grilled about her social responsibility. “The three first letters are the same, but not much else.”

Did she think she had the guts to do what her character did in the film? “Good lord, no way! I’m not that brave.”

Weisz added, “This is my favorite genre of movie — a thriller. A thriller based on true events. Ordinary women who do extraordinary things. The lone individual who goes up against a huge corporation. A piece celebrating the unsung heroes of the world who risk their lives doing what they believe in. Kathy didn’t know anything when she showed up in Bosnia, she was just going to do what she believed in.”

Kondracki, who directed the film, indicated her leading actress and her inspiration before adding: “These two are gals that’ll laugh and not take any sh-t, and I was just stunned how hard Weisz worked. I was blown away by her passion.”

Other attendees at the screening included Anna Anisimova (who has a part in the film), Olivier Theyskens, Albert Hammond Jr. and Nicole Miller. Stephen Baldwin walked the carpet with his sunglasses on, ready to spread the good word about his church. Was he, like Bolkovac, ready to take matters into his own hands if need be?

“Let’s just say,” Baldwin purred, lowering his sunglasses, “if anyone tries to do anything to you tonight, I got your back.”