The designer hosted a private cocktail at her West Village home Thursday night. 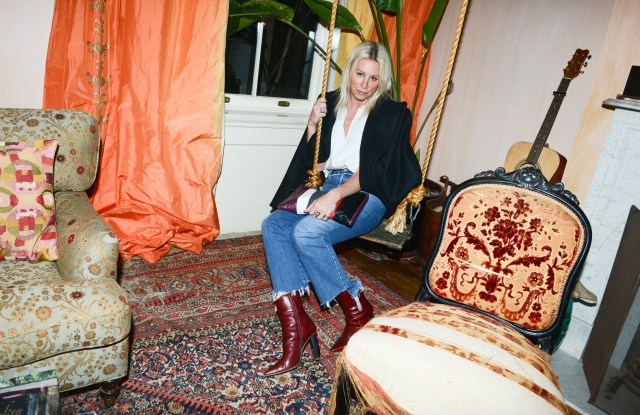 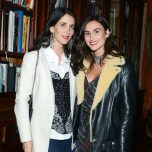 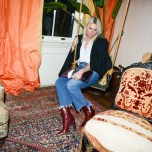 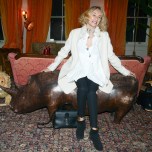 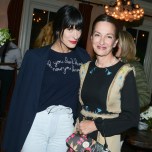 “Embroidery has always been a women’s craft, so I just feel like it’s a very feminist statement,” said Rachelle Hruska MacPherson, the designer and founder of Lingua Franca, from her home on Manhattan’s Jane Street.

As guests donned the brand’s individually hand-sewn cashmere sweaters, embroidered with hip-hop slogans like “It Was All A Dream,” it was hard not to feel a sense of female empowerment, especially given Tuesday night’s election results. Celebration was still in suit, however, to toast the brand’s partnership with Net-a-porter.

The line began after Hruska MacPherson’s therapist suggested she start working with her hands to soothe some of her anxiety. “I never intended to start a fashion line, and my therapist actually was like, ‘You should try and do something with your hands, it might help,’ and I said, ‘Well, I know how to embroider, my grandmother taught me in the fifth grade, but I haven’t done it in, like, 20 years,”’ she said. When she finally picked up the needle in February of last year, she was hooked, and so were her friends. “I wrote ‘Boo Ya’ on a sweater and I put it on Instagram and people were like ‘Oh my God that’s so funny, I want a sweater!’”

After a pile of more than 60 sweaters sat on a couch in her office to embroider, she realized that she was sitting on something big, and that she was going to need more help. “I found Kate, who is in the striped shirt over there with ‘Outlaw’ on it, on Craigslist. I put an ad out for an embroiderer and she came and I was like ‘Hey, do you want to help me sew these hip-hop lyrics on these sweaters?’” Hruska recalled.

Net-a-porter found the brand through Instagram in March, but Hruska MacPherson didn’t notice until July. “You know how they (Instagram) have direct messages, if they don’t follow you then they’re in a different file, so I go and I find this file and there’s like hundreds and hundreds of messages and one of them was from Net-a-porter,” she said. Even though they had yet to have a name, Net-a-porter placed an order.

“I loved the name ‘Lingua Franca,’ it means ‘the common language.’ I thought hip-hop is the common language, a woman on the Upper East Side knows the lyrics to Drake as does someone living in the Dominican Republic, like a kid,” Hruska MacPherson said. The Lingua Franca team currently consists of 30 women embroiderers or as Hruska MacPherson likes to call them, “the b—h n’ stitch.”

Each sweater is intimately hand sewn, mistakes and all. “Every single sweater is hand sewn, every single one, and that is never going to change,” she said. “When people make mistakes I’m like, ‘No, keep the mistakes,’ like that’s what is so cool about them. It’s not done by a machine, it’s done by someone that has emotions and likes and dislikes.”

Lingua Franca has since been discovered by all of the fashion elite, but for the designer, it’s the brand’s greater message that she finds the most compelling. “We always think big because we’re New Yorkers, but sometimes small things make really impactful movements, and I do feel like Lingua Franca has this chance or this ability to resonate in a bigger way,” she said.