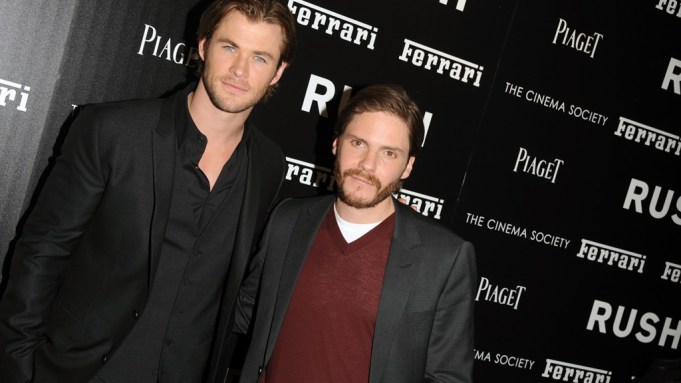 FASTER, FASTER: Attendees at Wednesday night’s premiere of the racing biopic “Rush” sure got their adrenaline fix.

After getting snapped by photographers, Hemsworth described the surge he got behind the wheel of a Ferrari during shooting. “I think most of us enjoy some form of adrenaline just because it snaps you into the moment and forces you to pay attention,” the actor said. “You stop thinking about tomorrow or yesterday. It’s the sort of immediacy with that kind of fear that makes it thrilling.”

Brühl did his fair share of prepping for the perilous driving stunts. “It’s fun to test your limits,” he said. “I did a couple Formula 3 courses and some lower division of Formula 1 courses.”

The screening, held at the Chelsea Bow Tie Cinemas, drew the likes of Dan Stevens, Sami Gayle, Oliver Platt, Courtney Love, Jeff Gordon and Margarita Levieva. After the screening, starlets migrated over to the Hotel Americano for the after party where they sipped on D’Usse cocktails aptly named Lauda’s Libation and The Formula.