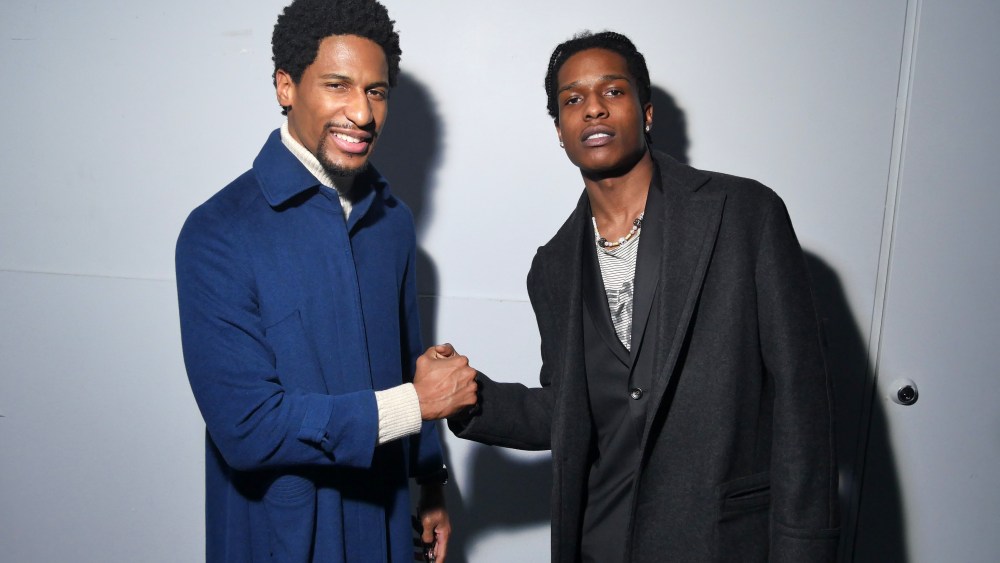 It was a feast for the senses as Raf Simons presented his fall 2018 men’s collection Wednesday evening in New York. The raised runway, which looped circuitously throughout a cavernous warehouse space in Midtown Manhattan, was piled high with the remnants of a bacchanalian banquet. Small mountains of fresh pears sat alongside piles of chocolate blocks, wheels of cheese, loaves of bread, syrup-doused waffles and plump grapes. Countless bottles of red wine lined the edge of the stage, multi-colored lasers pierced through the air and a soundtrack of baroque music set an ominous tone as guests including rapper A$AP Rocky, singer Jon Batiste and “Twin Peaks” actor Kyle MacLachlan poured into the venue and jockeyed for a position at the standing-only affair.

“I love that Raf always gives us a different format for a show,” observed Liya Kebede. “It feels like a big party.” The model was dressed head-to-toe in pieces by Simons, both from his collections for Calvin Klein and from his own label. “I love all of this men’s stuff that you can wear oversized — there are no rules with it.”

There were certainly no rules to participating in the feast, either, as staff encouraged guests to help themselves to the food and drink laid out on the stage. “I had some grapes, but the chocolate was too hard to reach. I tried, but that means I would have to actually go on stage,” admitted Doutzen Kroes, who was also dressed nearly head-to-toe in men’s wear.

“For a woman, [men’s wear] is perfect,” she continued. “It’s all men’s wear I’m wearing except for the shoes, but I actually do wear men’s shoes a lot.” The model was also wowed by Simons’ experiential event. “Normally [a fashion show] is more stiff and this is more like a club scene. It’s fun for people because you get a drink, you get some food and the music is everything,” she said of the show’s bass-heavy soundtrack.

But Kroes, who last September walked in Versace’s spring 2018 show in Milan, admitted that with two children at home she no longer has the time to participate as frequently in New York Fashion Week as in the past and now sees it as “a great escape to see my friends — almost like a reunion.”

Singer-songwriter George Lewis Jr., who is better known by stage name Twin Shadow, lingered after the show to snack from the stage and chat with friends. “I’m kind of baffled by the decadence,” said the musician, who next month joins Beck on his U.S. tour. “[Raf] is making us think for sure. We’re enjoying some of it, but at the same time I’m thinking where does it all go afterwards? I’m going to take something home so that I feel better about being here.”

But Lewis will feel even better knowing the leftovers not carried out in purses and coat pockets on Wednesday night were later donated to City Harvest, a New York-based organization that delivers food to pantries, soup kitchens and community programs throughout the city.