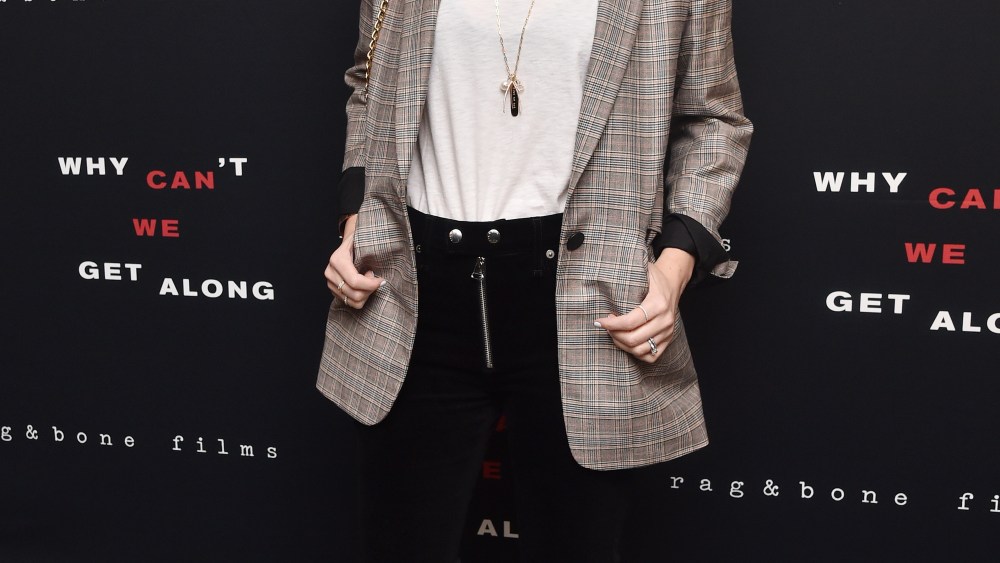 As New York readies for fashion week, the team at Rag & Bone will have already exhaled a collective sigh of relief. On Thursday evening at the Metrograph theater in Manhattan, the label provided its alternative to a traditional runway show in the form of a short film titled “Why Can’t We Get Along.”

The six-and-a-half-minute production, which has no dialog, explores perspective and movement set to a haunting soundtrack by Radiohead’s Thom York. Codirected and choreographed by former New York City Ballet principal Benjamin Millepied, the interpretive work was filmed in a Brooklyn warehouse with actors Kate Mara and Ansel Elgort leading a troupe of trained dancers wearing, of course, the label’s spring-summer 2018 collection, which is currently available in stores.

“Not doing shows anymore and having pulled out of fashion week [means] we’re just focusing on creating awesome content that represents our philosophy as a brand,” explained Marcus Wainwright, who cofounded the company in 2002. “It organically shifted from an idea to do a film into an idea to do it on perspectives and movement.”

While other brands may dictate a singular concept, Wainwright was keen on allowing his team of creatives — including filmmakers Aaron Duffy and Bob Partington along with cinematographer Darius Khondji (“Midnight in Paris”) — to each leave their own thumbprint on the work.

“We love the idea of working with incredibly talented people not to execute our specific brand vision, but [rather] the idea that Rag & Bone as a brand embraces individuality,” continued Wainwright, who in the past has commissioned “DIY” portrait series in which the subjects have styled themselves in the brand’s clothing. “Some of the creative control has been given over to the people we work with. In some ways that’s how we approach the clothes: Rather than telling people what to wear, the idea is Rag & Bone is a company that represents a way of thinking about clothes, a focus on craftsmanship, quality and timelessness.”

Mara, who is in New York filming Ryan Murphy’s latest project, “Pose,” approached “Why Can’t We Get Along” with a certain level of intimidation given its loose structure. “It’s about movement and I’m not — I can move and I can relatively dance, but I’ve never been trained in dance,” she said standing alongside a cocktail bar ahead of the screening. “It was very improv for me.”

Mara noted how Elgort, who did not attend the downtown affair, was “really going for it” toward the end of the one-day filming, which helped encourage the rest of the cast to create an elegant interplay with various mobile camera rigs. “I was excited [to work with Rag & Bone] because their campaigns are always very raw and are not typical. As an actor, to be able to make a short film with no dialog, no music and [all] emotion is sort of a dream.”

Asked if putting together a short film is more challenging than orchestrating a typical runway show, Wainwright’s response was direct. “F— yeah, absolutely,” he exclaimed. “We did 20-odd shows in our years as a runway brand, [but] it just began to feel very stale for us.

“It felt dated and out of touch for me,” he continued. “While it was easy and safe and every February and September you knew what you were doing, now we have complete freedom to do absolutely anything all year round.”

While Wainwright admitted this new format or presenting a collection comes with “a lot of pressure and stress” to create an original idea, the creative reward has been continually more gratifying for the company than by simply sending models down a runway twice a year.

“It’s a breaking down in some ways of the system we’ve all been working in for a long time,” he added. “We have to start thinking about the customer. It’s not about the press anymore; it’s really about the customer [who has] so much transparency these days. You’ve got to think about what will resonate with them and do they care that [fashion week] is in September [or February]? Probably not.”

Joel Kinnaman on The Power of Transformation