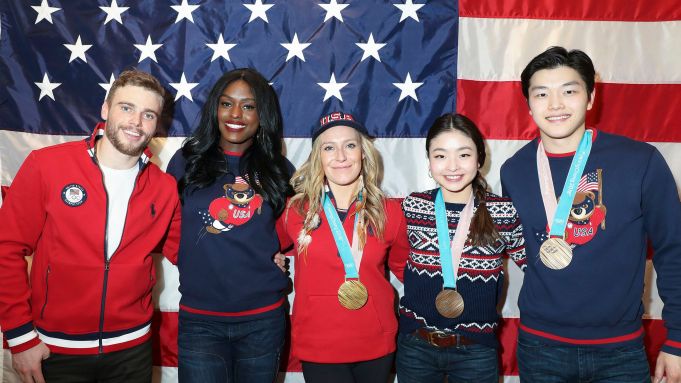 Ralph Lauren’s store event for fans to meet Olympians from Team USA was only 15 minutes in, and already security was warning that chances of making it into the store by closing time were slim. The American athletes might not have fared strongly at the Pyeongchang games, but nevertheless enthusiasm was unwavering.

“I didn’t do that well in my event and people are still wanting to talk to me, which is nice,” said Gus Kenworthy from inside the mobbed Polo Ralph Lauren shop.

“I’ve been running around Manhattan — never a dull moment,” said Anderson, who attended WE TV’s pop-up “Bridezillas” earlier in the day. “Thankfully, I’m here with the whole team which is refreshing.”

The snowboarder, who won gold at the games, said that after all the excitement, she’s happy to have a moment off. “I think everyone is pretty relieved it’s all over and we can breathe again. Not that it’s that bad, but it is a lot of stress,” she said.

Aside from competing (and, you know, winning gold), her favorite moment from the games was watching her boyfriend, Tyler Nicholson, compete.

“He’s on Team Canada, and he competes in the same event as me, and I was so proud of him,” she said. “It was really fun to be there and support each other.”

In her downtime, she managed to fit in a bit of shopping.

“I went thrifting a little bit, which was fun because the South Korean women have such cool style,” she said. “I got some cool shoes, a jean jacket, a cool hat…some fun picks I know are super original and one-of-a-kind.” Evans used her shopping time in South Korea to stock up on beauty products, as a self-identified glam lover.

“I mix it up, I love going out, so I like the whole glam aspect of doing my hair, makeup, wearing some heels and a cute outfit,” she said, between signatures. “But I also like a sporty, chill vibe too: comfy sweats or T-shirts are my things as well.”

The Shib Sibs noted their style is owed to Ralph Lauren. “They make me look way better than I would look in anything else,” Alex said.

The ice dancing costumes, as always, drew lots of attention from the fashion industry this time around.

“I think it’s an interesting give and take — I know that skaters and designers from skating take a look at what fashion is doing,” Alex said.

“In all fields, people find inspiration in different things. So it’s interesting to hear that fashion designers are looking at skating,” Maia added.

Celebrity Stylists on the Business of Oscars Fashion, Time’s Up and Beyond