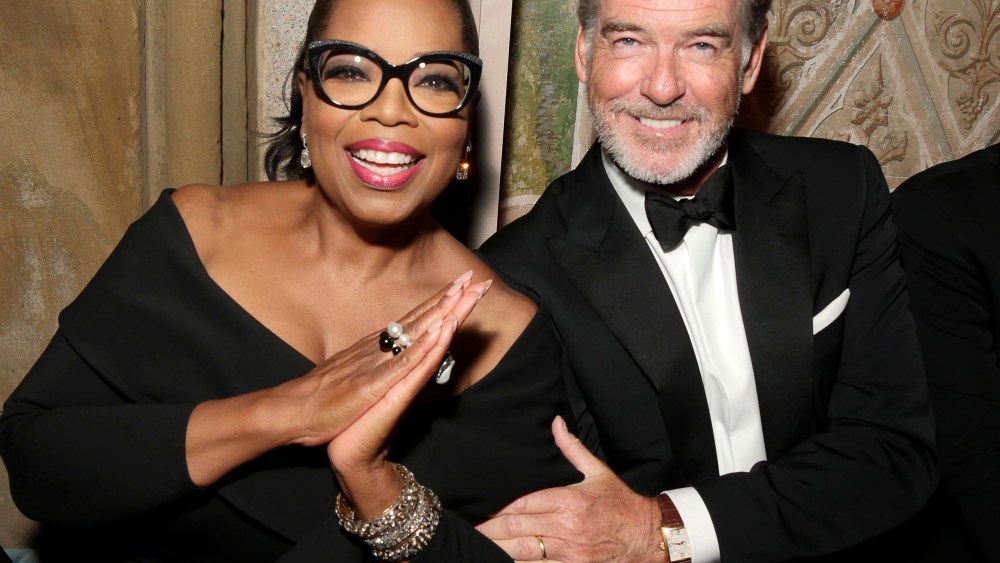 Who but Ralph Lauren, on the occasion of his 50th year in business, could draw luminaries from the celebrity, fashion, media, retail and political worlds to Central Park on a Friday night, for an evening of cocktails, fashion and dinner?

The iconic American designer was toasted with a celebration fit for his anniversary that brought everyone from Hillary Clinton and Oprah Winfrey to Kanye West and Steven Spielberg — as well as a strong showing of American designers — to the Bethesda Terrace. There was newly engaged couple Priyanka Chopra and Nick Jonas, playing affectionate for the cameras and showing off her ring from the front row; there was Anne Hathaway, who walked in with Diane von Furstenberg before making her way over to pal Jessica Chastain, who had come with husband Gian Luca Passi de Preposulo; there was Oprah setting off the cameras in a flurry, before she sat down next to Pierce Brosnan; there was Kanye West, who curiously arrived in a bright orange jacket with a Prada logo printed across the front, before he smartly changed into a black dinner jacket (that we can only hope was Ralph).

“I’m your biggest fan, Ye,” Ansel Elgort called out to West as the rapper was snapped by cameras.

“I went to school with his kids, and more than that, I was obsessed with my purple argyle vest, and I used to wear it with white Ralph Bermuda shorts,” shared Ellis Ross. “I have so many Ralph Lauren stories — I worked at Ralph Lauren when I was young. I worked in Greenwich, Conn., on the sales floor. And my first time nominated for an Emmy I wore a couture dress made by Ralph, that sort of etched and framed me in time; it was a historic moment because I was the first black woman nominated in 30 some-odd years, and I was wearing an American designer and it was” — she made a kissing motion — “just perfect.”

That, and she one time stuck her father with a rather substantial Ralph Lauren bill, all in the name of good fashion.

“I sent my father to pick up a pair of suede Ralph Lauren jeans at the mansion and I didn’t tell him that they weren’t paid for,” she said. “But they were very special to me. So yeah — he was a big part of my childhood style that I sort of grew into who I am today.”

Spielberg was set on having a night out with his wife, Kate Capshaw.

“I’m just going to get my picture taken with my wife,” he said upon arrival into the cocktail space.

“I think Ralph’s a brilliant storyteller,” said Kors. “I love the movies, I’m a showbiz fan, and Ralph is like me — he loves film, he loves storytelling, and he likes to transport people. And I think that fashion is more than just what we put on our backs. I think it has to take you somewhere. I think he knew that early on.”

“Years ago before I started my own business I wore his polo shirts,” said Hilfiger. “His genius, his marketing, his clothes, his stores, his vision. He’s created a great world.”

“First of all I worked for him,” said Vera Wang, arm in arm with Karan. “I was a design director for him. He’s been my mentor, my friend, and I really celebrate him and his enormous accomplishment, and I feel very honored to be a part of it tonight.

“I think he’s sold a certain brand of Americana to the world,” she continued.

“You’ve got some good ones, too,” Wang replied.

“As his daughter, being an entrepreneur, I’m so inspired watching him do this for 50 years and not losing steam,” said Dylan Lauren. “I just hope I can do the same thing; it’s very admirable.”

“I think there was a moment during grade school where I was playing with my friends and we’d all known each other very well, and one of the kids just sort of pointed to their shirt saying ‘I’m wearing your father’s shirt,’” said David Lauren, of becoming aware that his dad was more than just his dad, but rather an icon of American fashion. “’I was like what? How do you know what he does? And it was at that moment it began to resonate.”

Tom Hanks Is the Only Celebrity We Need at NYFW