"I'm on a high," said the 80-year-old designer before dinner at London's Royal Academy of Arts. "I'm not tired at all."

By Samantha Conti and Miles Socha on November 15, 2019

True to the image of the sophisticated gentleman that he’s purveyed for the past five decades, Ralph Lauren wrapped up his grand — albeit quick — tour of Europe in style with a boozy dinner Thursday night at London’s Royal Academy of Arts marking the U.K. debut of the HBO documentary “Very Ralph.”

Was he very tired after the whirlwind of Paris, where he hosted another “Very Ralph” event, and was named an Officer of the Legion of Honour by French President Emmanuel Macron?

“I’m on a high,” said the 80-year-old designer as he made his way up the big stone staircase to dinner at London’s Royal Academy of Arts. “It’s been fabulous — I’m not tired at all, and I’m headed home tomorrow.” 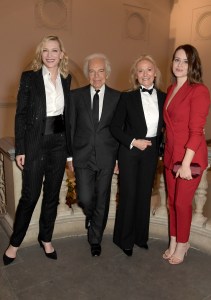 Dressed in a dark suit and white shirt — a change from the pit-crew leather jacket he’d donned in Paris earlier this week — the designer was ready to party with family, staff, friends and Londoners who will forever be grateful to him.

“I did my first pictures with Ralph Lauren — by accident — in 1987,” said the model Saffron Aldridge. “I went with some friends to a shoot with Bruce Weber thinking I’d be standing in the background drinking Champagne — I was only supposed to be an extra.”

Lauren clapped eyes on the statuesque Brit, and the rest was history. Aldridge has been working with the brand ever since. Her sister Lily also models for the brand while Aldridge’s sons have been in campaigns, too. Talk about a family affair.

Designer Emilia Wickstead worked weekends on the Ralph Lauren shop floor in London for three-and-a-half years. “It taught me how to sell,” said the designer, who is off to host a series of events with Matchesfashion.com in Los Angeles. 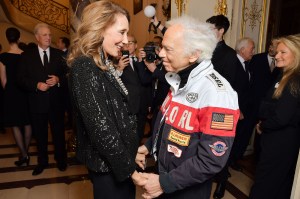 Foster, who designed the Sackler Galleries at the Royal Academy of Arts, paid tribute to Lauren — and his U.K. sartorial roots — ahead of the premiere, saying Lauren’s style was inspired partly by the “explosion of male fashion” in London in the Sixties, “with wide shoulders, cuffs and bell bottoms.”

He reminded everyone, too, about the pioneering wide ties that launched Lauren’s career in New York.

Like Lauren, the 84-year-old Foster is still hard at work “on projects large and small.” Britain’s most famous architect is currently designing an aviary for the London Zoo, a rowing club in Harlem and JP Morgan’s headquarters on Park Avenue in Manhattan.

On the previous night, the Ralph Lauren party train pulled into Paris, where the designer was in a racing mood. 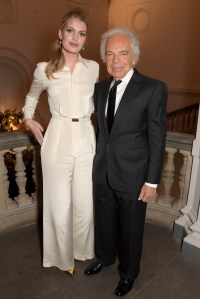 “I just made it. I went to my restaurant in New York wearing this. I never had so many comments,” said the designer who had exhibited his car collection at Les Art Décoratifs in 2011.

Isabelle Adjani, Marisa Berenson, Monica Bellucci and Laetitia Casta were among guests at the swanky evening that culminated with a sumptuous dinner amid thousands of red roses, some bouquets as big as wrecking balls.

Poured into a slinky black gown with a bare back, Casta said she just wrapped filming a TV series for Arte called “Une île” in which she portrays a murderous mermaid. “It’s a fantasy thriller with a lot of special effects,” she related. “It’s quite different for Arte. The message is ecological and feminist.” 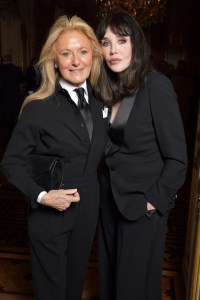 The French model and actress landed one of her first jobs doing a campaign for Lauren when she was barely 15 years old. She would go on to become the face of one of his fragrances, Notorious, in 2008.

“So moving,” Berenson swooned after the screening, which included reams of family movies of the American designer, Ricky and their three children. “It’s rare to find a family that’s so united. That message of love and real family values — nothing superficial about it. He encourages people to follow their dreams and to believe in them.” 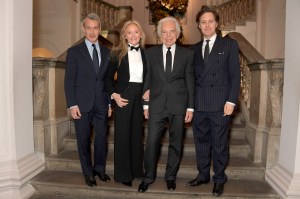 “I got an airplane,” Lauren marveled.

The Ralph Lauren party train ended in London, with family members having hosted events in Moscow and Berlin earlier in the week.