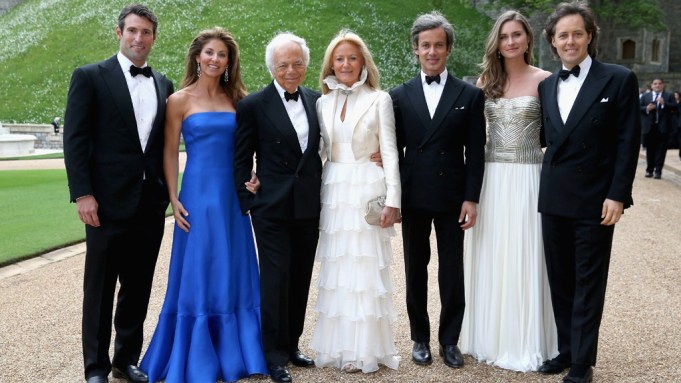 “This is not a film set — it’s the real thing. We’re used to the film set,” said Ralph Lauren as he made his way from the vast Waterloo Chamber at Windsor Castle — where Queen Elizabeth II and Princess Margaret used to perform Christmas pantomimes as children — to St. George’s Hall with its soaring ceilings and suits of armor lining the walls. “And Prince William is very sweet,” added the designer.

Lauren was the guest of honor at a dinner hosted by Prince William, president of the Royal Marsden Cancer Charity, in aid of the specialist London cancer hospital. Lauren, who attended the gala dinner with his wife Ricky and children David, Dylan and Andrew, on Monday revealed a multimillion-pound donation for a new Ralph Lauren Centre for Breast Cancer Research that will open next year at the Royal Marsden’s main branch in Chelsea.

They gathered for cocktails in the Waterloo Chamber, which is hung with giant oil paintings of monarchs, dukes and popes. Dinner began with the prince thanking Lauren for “incredibly generously funding” of the cancer center that will “set a benchmark” for cancer research, and ended with Emeli Sandé performing a live set in St. George’s Hall.

The dinner for about 150 people was served at long tables filled with hurricane lamps with lit candles and flowers. The dinner itself included salmon with vegetables as an appetizer, and steak — which presumably wasn’t from Lauren’s ranch in Colorado.

Earlier in the evening, the prince kidded guests as he made his way around the room. “He said, ‘I bet you’re used to these sorts of surroundings,’” recounted Leech, who plays Tom Branson, the chauffeur-turned-aristo on “Downton Abbey,” after shaking hands with the prince. “Well, this is a bit bigger,” Leech told William.
The actor is in the midst of filming the latest season of “Downton,” which will air in the U.K. at the end of September. “We’re halfway through filming — hallelujah!”

Blanchett admitted that she didn’t visit Windsor Castle to research her role as Elizabeth I in the two films directed by Shekhar Kapur. “Oh no! I went to the Tower of London — much more foreboding. But I have been here in Windsor to film ‘Robin Hood,’” said the actress, referring to the Ridley Scott film also starring Russell Crowe.

“I feel like the statues are going to come alive,” said Goldsmith, casting her eyes around St. George’s Hall, which — in addition to the suits of armor — is lined with marble busts and colored crests. Goldsmith, who was decked in Ralph Lauren right down to her glittering Art Deco earrings, has been indulging her inner designer of late, with a new jewelry line called Loquet London. The collection, which she designs with her old friend, model Laura Bailey, features gold and crystal lockets and charms, and she’s taking it to the Couture show in Las Vegas at the end of the month. Goldsmith will also be attending events in Cannes, France, where her boyfriend Alfonso Cuarón opens the film festival Wednesday.