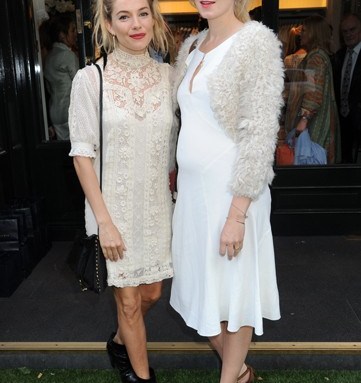 LONDON — “I want Roger Federer to win Wimbledon. I have a pathetic schoolgirl crush on him,” said Poppy Delevigne at Ralph Lauren’s Wimbledon party in London on Tuesday night. “Every time I watch tennis, it’s like he’s playing just for me,” added the model, who is off to the Glastonbury music festival this weekend.

The event, co-hosted by Boris Becker at the brand’s Chelsea store, marked the 125th anniversary of the tennis tournament, and was in support of the breast cancer charity Too Many Women. Guests included charity ambassador Jo Miller, her daughters Sienna and Savannah Miller, Adi Hunter Cook, Jade Parfitt, Tallulah Harlech, Sabrina Guinness, and Liberty Ross.

Becker, who splits his time between London and Zurich, and who is a BBC presenter for the tournament, said the former is his preferred city — at least for part of the year. “The weather isn’t as bad as they say. I prefer London in summer to Zurich — there’s more to do.” He’s not long for London, though. Becker and his family are heading to Ibiza for a holiday soon.

Ralph Lauren, the tournament’s official outfitter, decked the store’s staff in Wimbledon garb and scented the room with “Centre Court,” a specially created candle with notes of moss, peach, tuberose and rose.