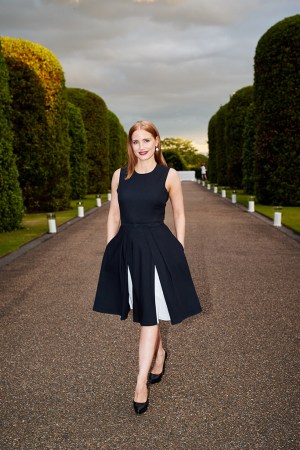 The grand Orangery at Kensington Palace, built for Queen Anne in 1704, was the scene of a summer party thrown by Ralph Lauren to mark its 10th anniversary as the official outfitters of Wimbledon, which runs from June 29 through July 12.

“You know, when I started playing tennis 30 years ago, before the Internet and before mobile phones, the ball boys and umpires just wore generic clothes,” recalled tennis great Boris Becker, who hosted the party with British Vogue editor Alexandra Shulman. “They look so much better now in their Ralph Lauren uniforms.”

Maisie Richardson-Sellers, who appears in the next “Star Wars” installment, didn’t say much about filming the sci-fi blockbuster besides that it was an “incredible experience.”

“[Director] J.J. Abrams didn’t want to CGI everything so the costumes and the sets were so detailed, everything hand-painted in minute detail,” she said, adding that she’s been spending time in South Africa filming “Of Kings And Prophets.” She described it as “a biblical drama for ABC that is supposed to be the next ‘Game of Thrones’ with power-hungry characters, great costumes, great plot twists and lots of drama.”

Mollie King said that she’d recently played a match with her boyfriend, David Gandy. “We’re both so competitive. I had on a cute little outfit and felt pretty confident. but he hadn’t told me that he was basically on his county team for tennis and is really very good. He thoroughly beat me,” she said. “I think he was getting me back for being a better skier than he is.”