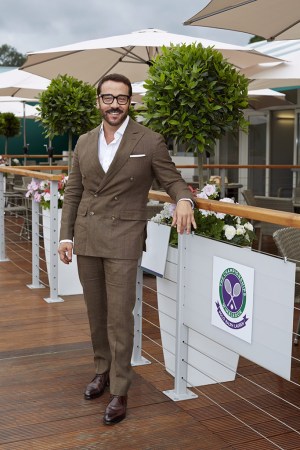 TROPHY MOMENT: “Here, please eat some, they’ll give you clarity and good karma,” said Jeremy Piven as he offered up a bag brimming with a rainbow of candies during the Wimbledon men’s finals, where Novak Djokovic beat Roger Federer in four sets.

Piven eventually offloaded the gummy, garishly colored sweets on retired soccer champ Thierry Henry. “I told him — you’re the only guy who’s gonna work it off.”

Piven joined Kristin Scott Thomas and Sam and Aaron Taylor-Johnson as guests of Ralph Lauren, which is marking 10 years as the official outfitter of The Championships, Wimbledon.

“What a stressful, incredible afternoon,” declared Scott Thomas, who happily spent her day off as a spectator rather than the main attraction. She’s currently appearing as Queen Elizabeth II in the West End play, “The Audience.”

She’s a tennis regular, and loves nothing more than a final. “I was already at Roland Garros,” she said of the French Open.

The Taylor-Johnsons, meanwhile, were on the edges of their respective seats for most of the three-and-a-half hours it took Djokovic to beat Federer.

It was their first time at Wimbledon. “It’s so much more intimate than the U.S. Open,” said Sam. “Here, you can feel the silence” on Centre Court. “The silence has a presence.”

She added that she has zero creative projects in the pipeline. “Absolutely nothing,” said the artist-turned-film-director. “I’m going to spend time with the kids and get my energy back. I need to come up for air.”

Piven was particularly pleased about Djokovic’s win: “I know him and love him — he’s a good guy with a big heart, who loves to laugh. But either way, it would have been a win,” he said.