Apparently, the pizza story about Diana Krall and her husband Elvis Costello is true.

“Her husband proposed to her at a pizza shop. How sweet is that?” said Christian McBride, at the Ralph Pucci International, 44 West 18th Street, which was transformed into an intimate jazz club Wednesday evening.

Once a year, Pucci, an eclectic showroom for luxury home furnishings, lighting, fashion, art, photography and mannequins, stages a version of the “Conversations With Christian” radio show, to benefit Jazz House Kids, a community arts organization in Montclair, N.J., educating children through music programs, mentoring and apprenticeships. His wife Melissa Walker is founder and president of Jazz House Kids.

“I’m a huge jazz fan so it’s a thrill to host Jazz House Kids in our gallery,” said Ralph Pucci. “This was the fourth annual show and it keeps getting better. Diana Krall is just a major talent and she and Christian have such a wonderful friendship and energy together.” Pucci said the 225 guests raised nearly $280,000 for Jazz House Kids, which he said nurtures “the next stars of jazz.”

The two jazz greats took a conversational stroll down memory lane recounting being together on the road, in the recording studio and just hanging out. In between McBride lobbing questions at Krall, the two performed some hit songs including “All or Nothing at All” and “Cry Me Down a River” and jammed with students from Jazz House Kids.

A native of Nanaimo, a small community on Vancouver Island in Canada, Krall said little about how the marriage proposal came down, other than she believed it happened 13 years ago. “I’m not very good about time.”

Repeatedly running her hand through her long blonde hair, the singer-pianist seemed comfortable talking about others; less so about herself. “It’s difficult for me to talk about things,” she said. “I don’t say anything. I just listen and it’s not necessarily to people who are well-known. I could be sitting in a coffee shop,” and listening to a stranger or a friend.

She did explain what’s important to her. “To get a chance to play the music I wanted to play, that was the most joyful.”

She also advised the students to express themselves and bring different perspectives to their performances. Making mistakes or playing the wrong chords, “I don’t mind,” Krall said. “You just have to be feeling things.”

Then she recounted meeting some of the most influential people in her life, like the late Ray Brown, “a great mentor” and bass player who encouraged her to sing, and Oscar Peterson, the late jazz pianist and composer. “When I saw him play at the Orpheum in Vancouver with Ella Fitzgerald, that changed my life.”

She spoke of a recent visit with Joni Mitchell, said to be an inspiration for Krall extending her repertoire beyond straight jazz. “She was very generous talking to me about her experiences,” said Krall. 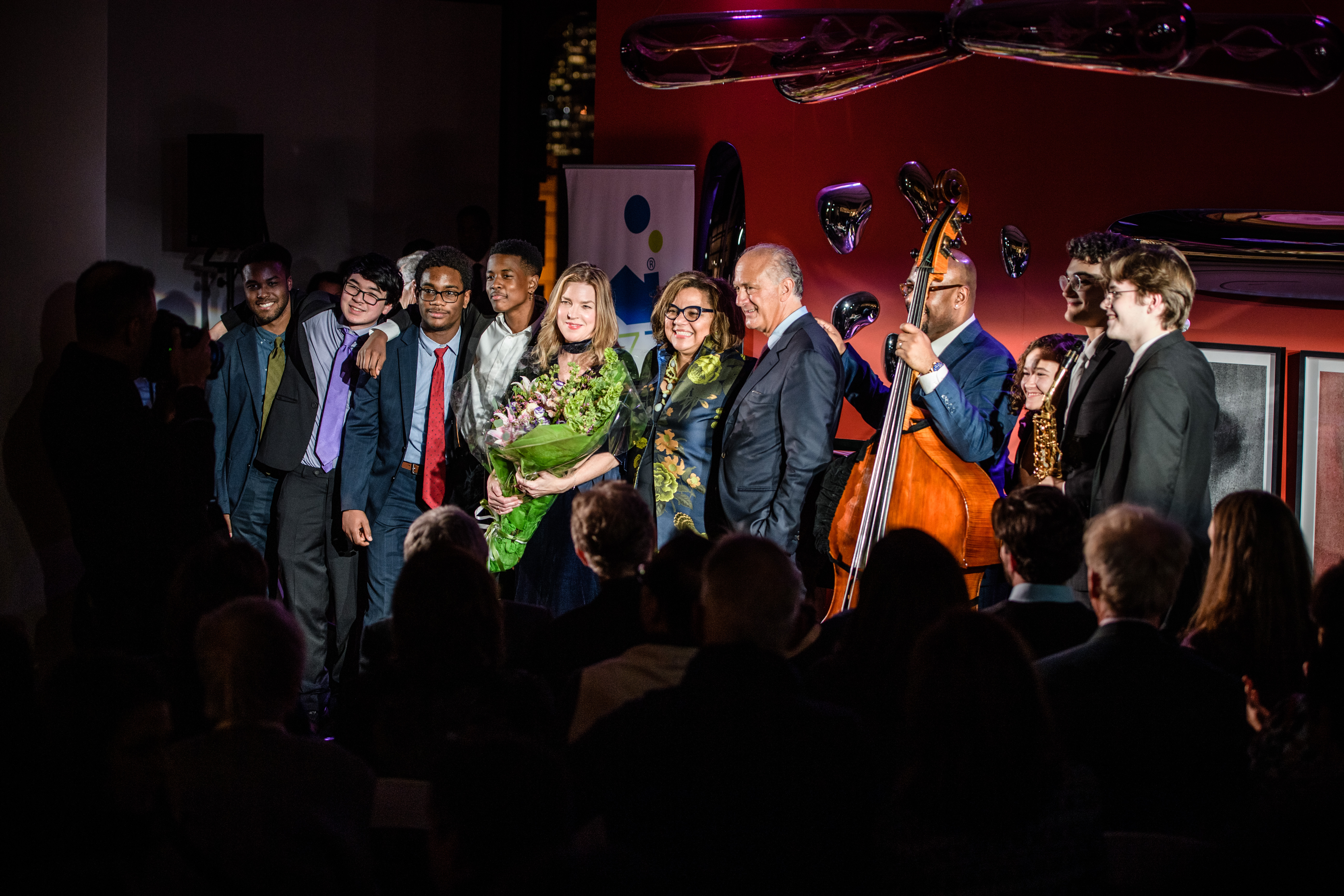