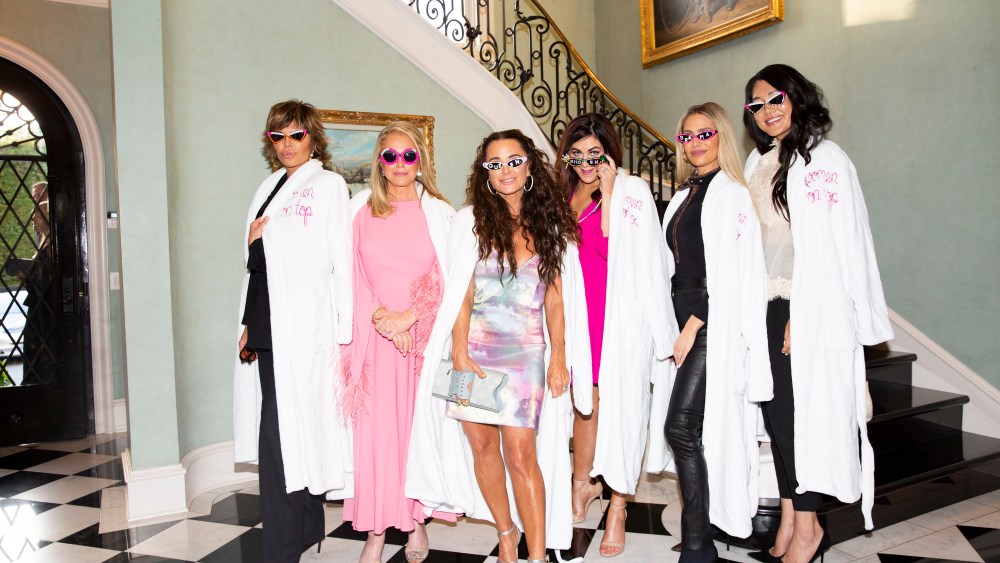 “Events are officially back,” declared a guest inside Kathy Hilton’s black-and-white marble foyer.

It seemed so, at least in Los Angeles on Wednesday night at the Hilton residence in Bel Air, where an intimate — and maskless — party was gathering. Following CDC guidelines, those vaccinated (seemingly everyone) were unmasked.

In the living room, Hilton was posing for photographs with her eldest daughter, Paris.

“Sliving,” mused Paris after a flash. It’s her newest mantra, a blend of slaying and living — as in, living your best life.

Moments earlier, she had been recording her podcast, “This Is Paris,” in the house with the current cast of “The Real Housewives of Beverly Hills,” including her mom, its newest addition.

“I’m comfortable in front of the camera, but it’s just weird for me to see myself,” Hilton said of watching herself on Bravo during the season premiere last week. “You know when you listen to yourself on the telephone, on your voicemail and you hear your voice? No one likes it. So, I felt a little self-conscious. Not during, but watching.”

“It’s been really fun, you know?” Richards said of sharing the screen with Hilton. Richards is an original cast member, along with their middle sister Kim (who’s not currently on the series). “It was the perfect time in both of our lives to do this.”

While the entertainment world is well acquainted with Paris and sister Nicky Hilton Rothschild, as well as Kyle and Kim, Kathy has been more private in years past. So why reality TV now?

“I think because Kyle and I had such a rough road for many years,” she said, referencing the family rift that’s made headlines. “And the producer kept asking me and asking me. I was like, ‘No, no, no’. And then Kyle would not let up and kept calling. It flattered me and made me feel good. So, I thought, I talked to my husband [Richard], and he said, ‘It’ll be a nice time for you two to spend time together, and why not?’”

She also discussed it with her sons, who were supportive. “The girls I kept it from,” she added with a laugh. Her daughters weren’t so keen on the idea, though they’ve come around.

“It’s also been very freeing,” Hilton said of the experience so far.

Early in the evening, those present — Richards, Rinna, Kemsley and Minkoff, along with Hilton and entrepreneur Cindy Eckert, the hostess — posed for photographs in playful, custom Rad + Refined sunglasses (gifts from Hilton) and matching white robes with pink stitching provided by Eckert. “Women on top,” they read.

“Kathy has been so incredible,” said Eckert, creator of the “female Viagra,” founder of Sprout Pharmaceuticals and The Pink Ceiling, which invests in female-led companies. The two met at one of Eckert’s events. “She’s introduced me to so many incredible women on top. She’s the epitome of a woman on top who helps other women get there.”

Guests, all friends catching up, mingled in the backyard, before catching a viewing of the franchise’s newest episode. They munched on sliders, fries, a giant pizza by Big Mama’s & Papa’s Pizzeria, Sweetfin poke, candy and cake, while drinks flowed. It was easy to forget the reality outside.

“It feels a little weird, I’m not going to lie,” Richards said of being out again, while still amid the pandemic. “Someone came and hugged me, and I said, ‘Oh I’m not hugging,’ and then I felt really bad. I mean, I’m vaccinated. I have antibodies, because I already had it, but I’m still funny about hugging. And then I feel bad that I’m offending people. I’m not quite at the hugging and touching part. I hope people don’t think I’m rude. I’m just not quite there yet.”

“Everyone still has to be careful, and we’ve got sanitizers all over the place,” Hilton said. “Everybody’s vaxxed….It’s a new chapter.”