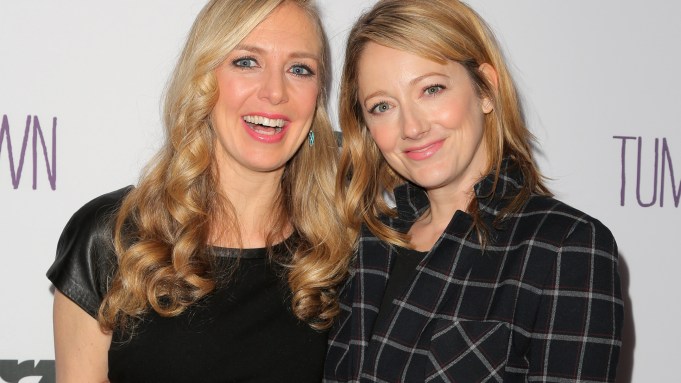 The quiet beachside city of Santa Monica isn’t often the site of movie premieres, but on Monday night, the American Cinemateque’s tiny vintage Aero Theatre hosted the premiere of Starz Digital’s “Tumbledown,” a romantic dramedy starring Rebecca Hall and Jason Sudeikis. In case the theme of the film (or the timing, with Valentine’s Day) wasn’t clear, the theater itself was decorated to look like a giant Cupid’s Bow. But the film, directed and written by husband-and-wife team Sean Mewshaw and Desiree Van Til, wasn’t all laughs. Van Til’s script follows a Maine widow who finds love again after hiring a brash professor to help write a biography of her late husband.

While the two leads skipped interviews — Hall was battling a chest infection and Sudeikis arrived late due to L.A. traffic — Joe Manganiello, who plays Sudeikis’ nemesis, provided the red carpet sizzle arriving with Sofia Veragra on his arm. “I’d like you to meet my wife,” he said to the crowd, before explaining what drew him to the role, which also provided much of the film’s comic relief.

“He’s got a dialect which is very similar to the one that I grew up hearing with my parents,” Manganiello said of his character. “My whole family is from New England and I spent every summer on an island in Maine. I heard a lot of people talk like the people were supposed to talk in this movie. I was talking to all of those family members and working with a dialect coach I met on ‘True Blood,’ Liz Himelstein.”

As for the filmmakers, they consider “Tumbledown” their first child. “It’s funny because the project spans the entirety of our relationship,” said Van Til. “When I started writing, we were just dating and then we got engaged, moved in together, got married and now we have two children. It’s finally coming into the world now. It’s amazing how much there is in common with nurturing [children] and believing in something and feeling a lot of love for the creation you’ve put yourself into.”

After the credits rolled, Van Til, Mewshaw, producers Kristin Hahn and Margot Hand and guests Marcia Gay Harden, Judy Greer and Zuleikha Robinson joined Manganiello and Vergara for an after-party at a newly opened Obicà restaurant nearby for wine and its famous mozzarella, salami and prosciutto.