On the Red Carpet at the Costume Institute Gala

Celebrities, designers and sports stars took the trek up the red-carpet-covered steps of The Metropolitan Museum of Art for the annual benefit.

By Marc Karimzadeh and Matthew Lynch on May 7, 2012
View Slideshow 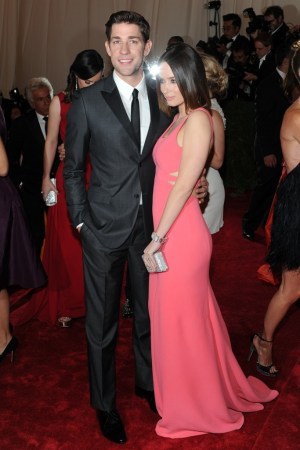 “Oh it’s just a lace dress in the spirit of unconventional thinking,” a demure Marc Jacobs offered on Monday night as he strode into “Schiaparelli and Prada: Impossible Conversations” in a Comme des Garçons creation that left nothing to the imagination.

Jacobs certainly adhered to the spirit of the annual Costume Institute gala at the Metropolitan Museum of Art, which this year celebrated an imaginary tête-à-tête between the two iconoclast designers.

RELATED STORY: Beyond the Red Carpet >>

The usual assortment of heavy-hitters turned out for the evening, including a gold-sheathed Carey Mulligan, co-chair this year and appropriately dressed by Prada. Honorary chair Jeff Bezos, chief executive officer of Amazon, donned a Tom Ford tuxedo for the evening.

In fact “Mrs. Prada made it for me” was a common refrain for the evening as Eva Mendes, Kate Bosworth and Hailee Steinfeld were among those outfitted by the Italian house.

Schiaparelli was represented by a number of women in the late designer’s trademark shocking pink, such as Karlie Kloss in a Jason Wu gown “inspired by” the designer.

And it wasn’t limited to the clothes. A small contingent of partygoers paid homage to the hue with pink highlights in their hair, including Coco Rocha, Julie Macklowe and Chris Benz. For once Benz’s do didn’t seem out of place.

Past the receiving line, new New York Jet Tim Tebow continued his fashion evolution: “I think I’m becoming one,” he said with an “aw shucks” grin when asked if he was a fashion guy. “It was just such an honor to be invited.”

“Girls” creator Lena Dunham got into the spirit of the night by considering her own impossible conversations. “Once my ex-boyfriend’s mom unfriended me on Facebook and I wanted to ask her why but I couldn’t because she’d already unfriended me.” Asked if she and fellow co-chair Miuccia Prada had ever had any impossible conversations, co-chair Anna Wintour smiled before replying: “Many… unrepeatable.”