Whether she hits or misses, Tilda Swinton has become a fixation for some style watchers, and an unofficial flag bearer for forward labels. 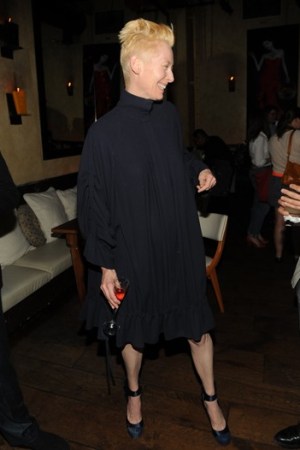 When most actresses dress for a red carpet, they (and/or their stylist) reach for something bright, strapless and maybe subtly bejeweled. Pretty, yes, but for anyone really interested in fashion, also kind of boring. Which is why, whether she hits or misses, Tilda Swinton has become a fixation for some style watchers, and an unofficial flag bearer for forward labels such as Haider Ackermann, Lanvin, Hussein Chalayan and Viktor & Rolf. On Tuesday night, at the Acqua di Parma- and Tuttobello-sponsored premiere of her latest film “I Am Love,” the actress didn’t disappoint. Swinton wore a drapey, high-necked navy dress with matching mary janes, all Fendi. (Silvia Venturini Fendi is a co-producer on the film.) Her platinum hair was a little parakeetish, but the overall look worked.

Swinton’s character in the film, a Russian matriarch of a wealthy Italian clan breaking apart at the seams, is equally skilled sartorially, thanks to Raf Simons, who Swinton commissioned to create her character’s wardrobe. “He did a really beautiful job,” Swinton said. “Raf’s a really modernist designer who also has a comprehensive cultural sensibility. He understood all the references we wanted to call on — Catherine Deneuve and Visconti. He was just prepared to go there and play with us.” The result is a covetable series of rich-looking shifts, pants and tops in saturated blues and reds mixed with a few soft pastels.

And Swinton didn’t exactly walk away from the arrangement empty-handed. “There’s a pair of fantastic orange pants from the film that I kept,” she said. “I’ve been wearing them for two years since we shot it, and I have to stop wearing them now that the film is coming out.”