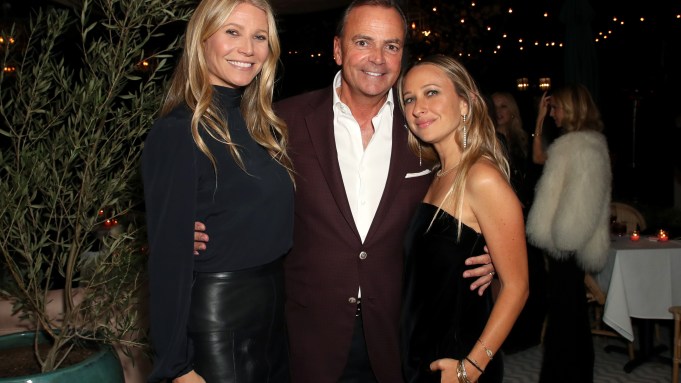 “I remember when Jen was in high school and she used to say, ‘I want to design jewelry, like necklaces with people’s names on them,'” recalled Jennifer Meyer’s stepmother Kelly Chapman Meyer. “And she did it.”

Indeed, when the jewelry designer struck out on her own more than a decade ago, after working for Giorgio Armani and Harrison & Shriftman, she created a gilded niche for herself in the “everyday” fine jewelry market with her delicate gold baubles, many sporting initials and nameplates such as “Jen” (Aniston) and “Courteney” (Cox). Meyer even inspired Hedi Slimane to name a Saint Laurent bag after her (the “Jen” bag).

So it wasn’t surprising that her first store opening, in Caruso’s Palisades Village, drew an armful of stars from her Hollywood circle, from cohost Gwyneth Paltrow and pal Reese Witherspoon to her ex-husband Tobey Maguire and his pal Leonardo DiCaprio.

It was also like a family reunion of sorts, with old friends of her dad Ron Meyer, such as Netflix chief Ted Sarandos and producer Mike Medavoy, stopping in. There were also old pals of Paltrow’s, like Chris McMillan, still congratulating her on her recent nuptials.

“This is really OG, even if I don’t live on this side of town,” said eastsider Rachel Bilson, there with her longtime stylist Nicole Chavez. “Who’d have thought I would keep coming to Pacific Palisades?” wondered Hollywood denizen Kelly Sawyer Patricof.

Even Londoners Natalie Massenet and Camilla Al Fayed, and New Yorker Jamie Tisch made it out. “Erik [Torstensson, her partner] has Frame Denim here and my daughter goes to UCLA,” said Massenet, who said a quick hello to former Net-a-porter colleague Sarah Rutson.

The party quickly moved from the tiny pink boutique itself to the equally pink, but spacious, Draycott restaurant a few doors down, and spilled over onto the great lawn. “Well, you know, it’s a party,” said Meyer, who spared no expense with personalized popsicles and pink spicy margaritas.

DiCaprio, who showed up late but with an impressive posse of guys in tow, asked “So where is the store?” before digging into the mini Kobe beef sliders on offer. “Man, this is the best burger,” he commented. As Meyer pointed out the various shops and restaurants, Rick Caruso and his team didn’t miss a beat in making him feel welcome. “Come back anytime,” they said.