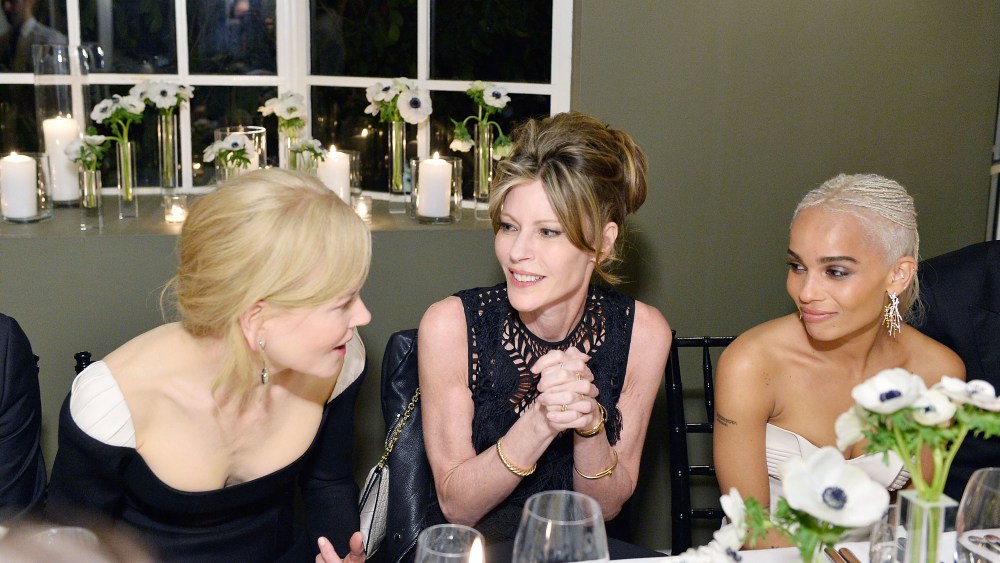 “Where is she? I haven’t seen her yet,” Zoë Kravitz said Saturday night of her “best friend” and mother Lisa Bonet, who was poolside at the Chateau Marmont while waiting for her daughter to wrap up her interviews.

Kravitz was honored by Elle for her burgeoning television career along with “Big Little Lies” castmates Reese Witherspoon, Nicole Kidman and Shailene Woodley in the magazine’s Women in TV issue.

“I feel like I’m going to turn into a pumpkin in two seconds,” Hahn said. “I can’t believe the company I’m in.” Minutes later, Waithe echoed, saying, “This is a wonderful group of women to be included in. I always feel honored when my name pops up on some list, when people think of me. It’s always flattering.”

Nearby, a small crowd formed near the bar waiting for the final attendee Kidman to arrive, who told Myers, “I’m so lucky to be here” before posing for photos with her castmates.

Soon after, all were ushered into Bungalow One for a three-course meal. But before they could dine on dover sole, brussels sprouts and crème brûlée, they took in a three-minute preview of “Big Little Lies,” which is set to premiere on HBO in February.

Regarding her new show, Woodley told said, “This was such a fun project for all of us to have been a part of, especially now that everything has gone down in our political climate where women are at the forefront. It’s not preaching feminism or a certain idealism. It’s just actually diving into the reality of women in 2017 and the realities of their truth and the way they unfold. We don’t see enough projects where you just get to know the inner psyche of a female.”

She added, “We do have strong male leads as well. It doesn’t negate or discredit the value or importance of these men’s lives in these particular women’s worlds. It focuses on the inner workings of these females and I think it’s a great starting point for a lot of things to be inspired by.”