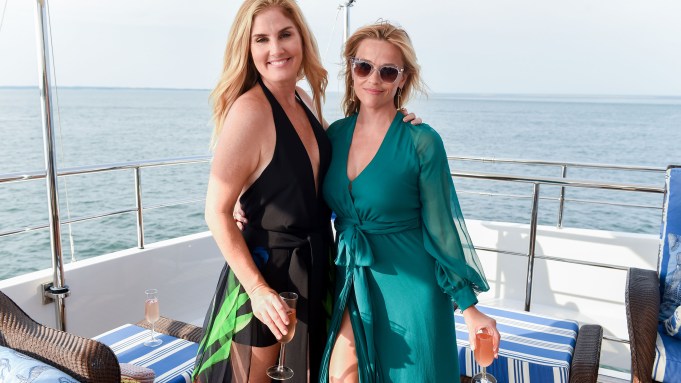 The venue for the affair, which was held in collaboration with fashion retail site Forward by Elyse Walker, was the Emelina — a 167-foot custom-built yacht owned by the Tennessee native’s parents.

“We’re going on a yacht,” cooed actress Olivia Culpo. She was poured into a lipstick red jumpsuit from the L.A.-based brand, which launched in 2013 and is partly inspired by Haney’s career as a celebrity stylist working with Taylor Swift and others. Looking more appropriately dressed for Studio 54 than the high seas, Culpo and her group of picture-perfect girlfriends paraded down the lengthy dock of the Devon Yacht Club like it was a catwalk.

As the tender reached the Italian-built vessel, a crew member announced the boat’s no-shoes policy, much to the chagrin of the  well-heeled passengers. “This is my first trip out to the Hamptons this year,” remarked Culpo, who next month begins filming an action film with Bruce Willis and will open a family-run restaurant in her native Rhode Island. “It’s called The Back Forty — I’m part owner, but I’ve dubbed myself social media manager for now.”

Haney, who lavished her welcoming southern hospitality to all on the deck, explained this event marked the end of a weeklong girls’ trip that cruised to Nantucket, Martha’s Vineyard and finally The Hamptons. The accomplished group included Reese Witherspoon, La Ligne founder Meredith Melling and Sprinkles Cupcakes founder Candace Nelson. “I feel so lucky to have these women in my life who are friends, but also incredibly bad-ass boss ladies.”

Witherspoon, wearing a gem tone green Haney frock, lit up at the mention of her “Big Little Lies” Emmy nomination — the actress’ first. “I’ve never made a TV show before so it’s exciting. The rules [for TV] have changed because the audiences have changed — they watch more television than they do movies, but it’s all about finding your female audience.”

The 41-year-old Nashville native noted how designs for her lifestyle brand Draper James reflect the sensibilities of the southern women with whom she was raised. “I created a line because I saw the south was having this explosion of culture and music and food and I just wanted to design into that idea that southern women are very stylish.

“We love color, pattern and really fun clothes — not a lot of black,” Witherspoon added. “Women in the south love to be stylish but they also love that they belong to something. Their fashion identity is just as important as anybody in New York or Los Angeles and it’s great to design to that aesthetic.”

The evening had no shortage of Instagram-worthy moments and Witherspoon was quickly pulled in by girlfriends aiming to capture as many group photos as possible before the sinking sun disappeared.

“I’m so glad Mary Alice came here [with this party],” said Molly Sims, who has been a Hamptons resident since the late Nineties. “She normally does so many things in L.A., so it’s nice to see Haney come to the Hamptons — and we get to not wear shoes and we’re OK with it.”

For more at WWD, see: