Rei Kawakubo on Newness, The Met in Rare Interview at Noguchi Museum

After receiving the Isamu Noguchi Award at the museum's Spring Benefit, Kawakubo engaged in a Q&A with director Brett Littman.

In a rare public appearance, Comme des Garçons designer Rei Kawakubo was in New York City on Thursday night to accept the Isamu Noguchi Award and engage in a Q&A with the Noguchi Museum’s director Brett Littman.

Kawakubo arrived to the museum in Long Island City for this year’s Spring Benefit with her husband, Adrian Joffe, her publicist and a translator. She wore a black, Chinese-style shirt with Mandarin collar and frog buttons, a black ball skirt, New Balance sneakers and a gold perfecto jacket. During cocktail hour, she stood quietly with members of her CDG team, her hands clasped together. Although people were fawning over her, she waved the attention away; when an employee from the museum asked Joffe whether the designer needed water, Kawakubo gently put her hand on the woman’s arm and shook her head no.

She didn’t mingle. People were led to her for an introduction — including the ambassador and consul general of Japan in New York, Kanji Yamanouchi, who, when he met her, bowed deeply with his hands on his thighs and then bowed a subsequent five times.

After receiving her award, which Littman presented to Kawakubo on a small stage erected inside the museum, he revealed they were “going to do something a little different.”

“I’m going to ask Rei a couple of questions and talk to her about her work,” Littman said. 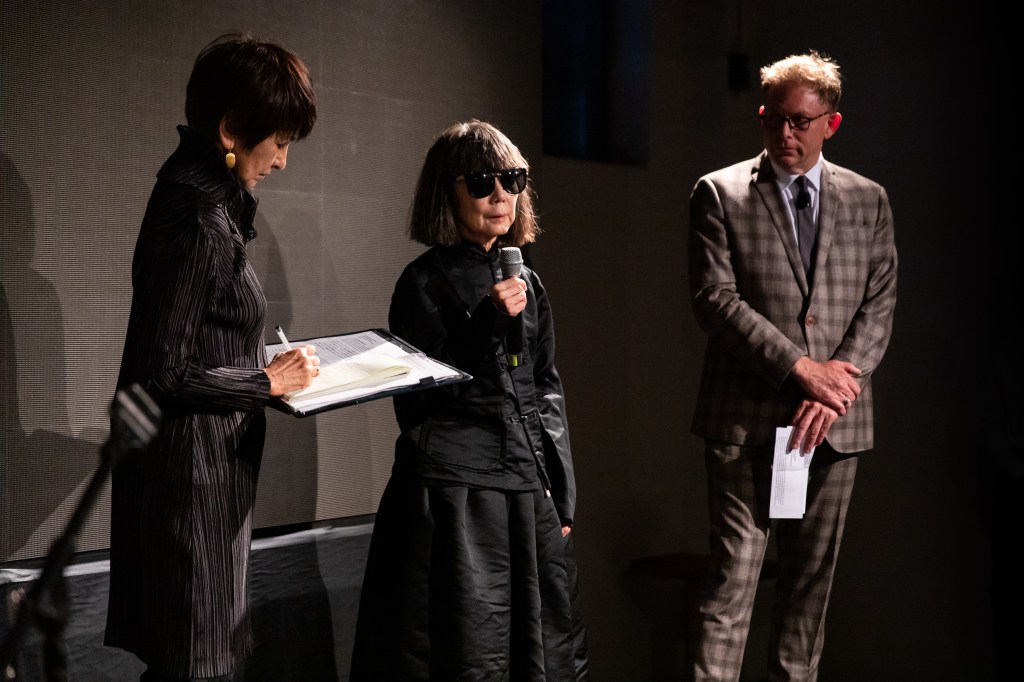 He first asked her to discuss her inclination to push boundaries and reinvent in her work. But Kawakubo skirted the opportunity to delve into her creative process.

“I’m not an artist,” she said through a translator. “And because of that, I just wanted to say that it is beyond my honor to receive this award. But I tried always to come up with something new, things that people have not seen. And I have gone this way for 50 years.”

Littman noted that both Kawakubo and Noguchi collaborated with the choreographer Merce Cunningham, and asked the designer to elaborate on her 1997 “Scenario” project with the dance icon.

“I was actually striving to come up with something new about clothing and then, how can I do more innovative designing for clothes?” Kawakubo said. “I started thinking about, well, the clothes are worn by our body. Let’s go back to our bodies and then look at it. Then I came up with the design collaboration with Cunningham and I think maybe that sort of helped me to come up with a new type of costume for the collaboration.” 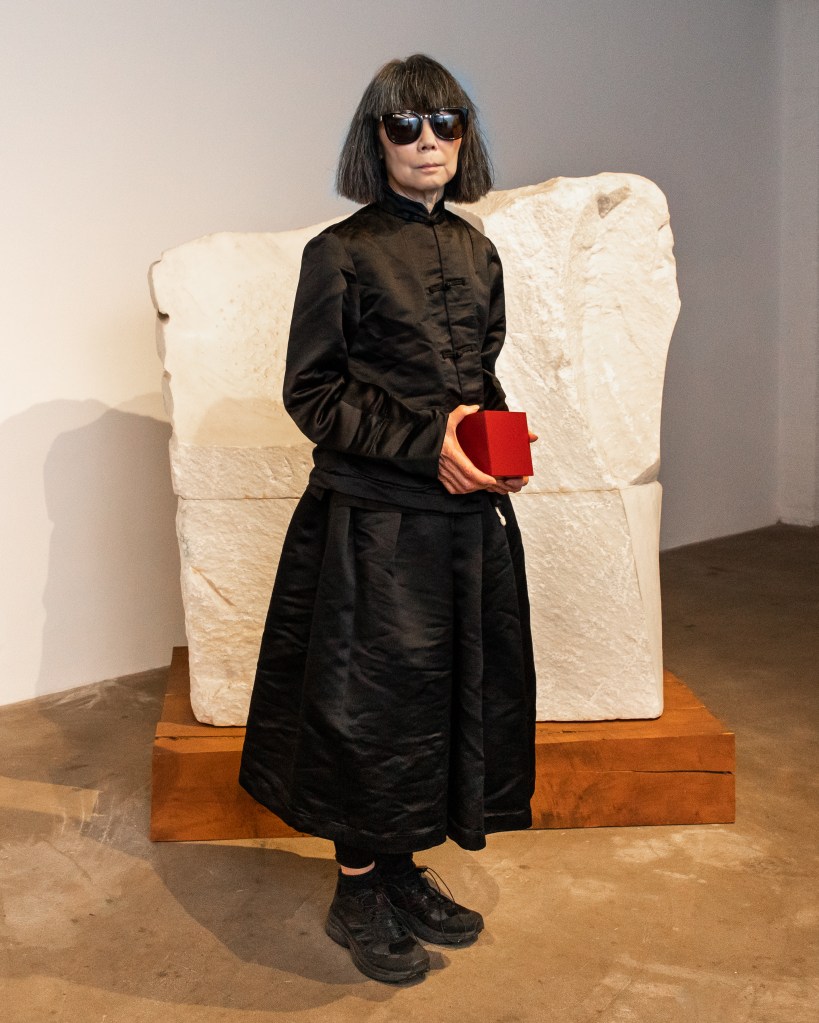 When asked about the Metropolitan Museum of Art’s exhibition dedicated to her work, “The Art of the In-Between,” and what the in-between means to her, Kawakubo’s face moved slightly into a smile and she shook her head, suggesting she wouldn’t be able to answer the question succinctly. The crowd laughed.

Littman’s final question for Kawakubo concerned Dover Street Market — a shop where the lighting, interior design and architecture are works of art. Why did Kawakubo find it so important to create design experiences in the retail environment?

“When I want to express me, it’s not the clothes that I express myself through. It is the whole environment that the whole clothes will stay in and take position in,” she answered. “And so the environment is just as valuable to me as the clothes that I make. That’s why I always have that in my mind when I’ve finished creating a clothes design. To me, actually, the environment — the total environment — might be even more important than the individual clothing that I make or design. Because the space is the one that makes the whole experience as a holistic approach. That’s the result you’re seeing.” 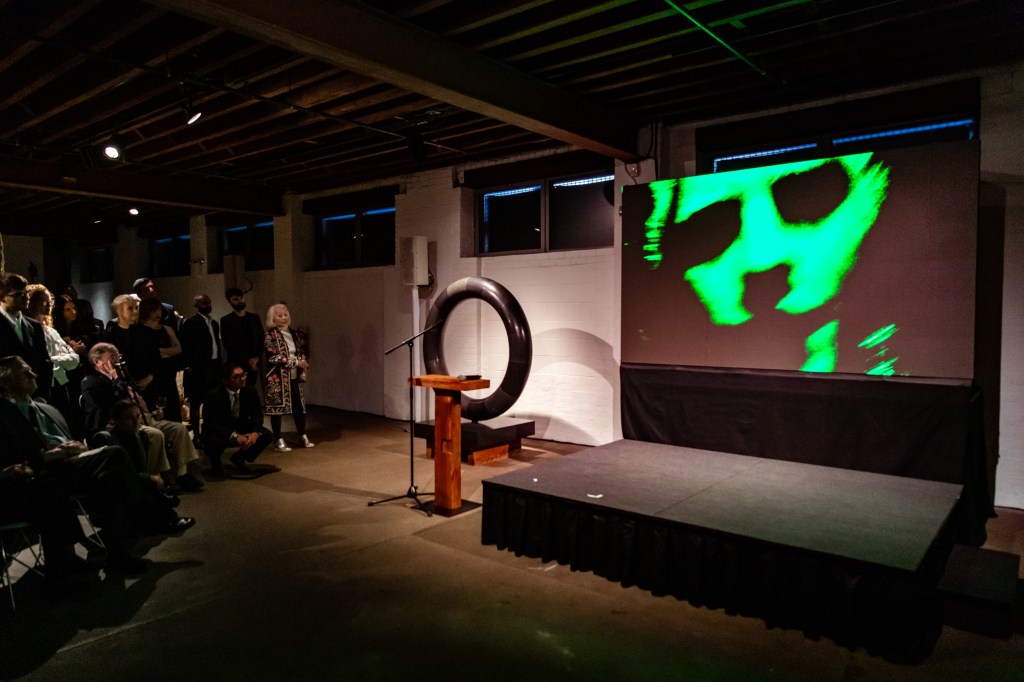 A still from the short Comme des Garçons film screened at the awards ceremony.  Courtesy photograph by Benjamin Lozovsky/BFA.com

Following the discussion, a film by Comme des Garçons depicting the latest collection in hazy, blurry focus was shown. The rumbling, heavy bass from the video shook dust from the wooden beamed ceilings. Kawakubo nodded her head in approval once the short film’s credits started to roll.

Littman, gesturing to the marble sculptures surrounding the crowd inside the gallery, laughed, “I think you’ve awoken the stones.”

Liz Diller and Carrie Mae Weems in Conversation at Prada