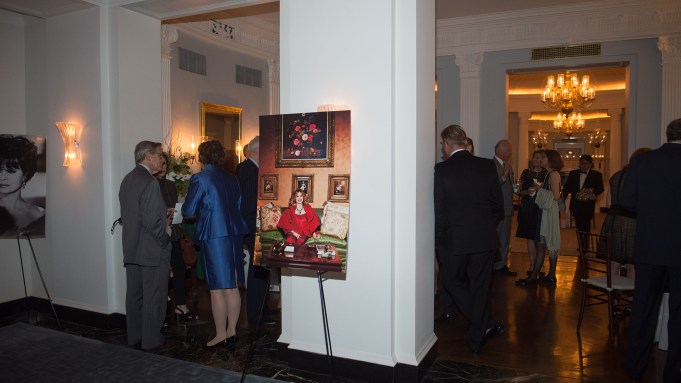 NEW YORK — “She would never just walk into a room — she appeared,” remarked Prince Dimitri of Yugoslavia about famed society columnist Aileen Mehle at a memorial reception held in her honor. “I never called her ‘Aileen.’ I called her ‘Goddess.’ She would look at me very seriously and say, ‘You are so intelligent,’ and crack up laughing. For years and years it was our routine.”

On Tuesday, the Georgian Suite’s opulent ground floor parlor on Manhattan’s Upper East Side was filled with many friends of Mehle, who went by the nom de plume “Suzy Knickerbocker” for her popular syndicated column, which appeared exclusively in WWD and W from 1991 to 2005. “She was a very elegant writer,” remarked friend Emilia Fanjul, who co-hosted the event with her husband Pepe Fanjul, along with Blaine Trump and Paul Wilmot. “She could walk into a room, look at a party, knew who was there and knew what made the party good. She was always full of stories and her memory was perfect until the day she died.”

Mehle, who died at her 1 East 62nd Street home in November at age 98, maintained her glamorous lifestyle until the very end. “She would get all dolled up, put on heels and go out on dates, usually to La Grenouille, which was her favorite,” remarked neighbor Alison Chance.

But it was Mehle’s power of the pen — and “velvet sword” delivery — that made her so influential within the rarefied world of New York society, according to Trump, whose ex-husband Robert Trump is brother of the U.S. President. “If she wrote about an event ahead of time, it would sell out.”

“She was always the life of the party,” recalled Carolina Herrera. “She was a beautiful woman and very bright — very naughty, which I loved. In every way she was naughty. She was always in a good mood and always fun.”

“She was a real glamour puss,” continued Blaine Trump, who thought of Mehle as a mother figure. “In all the years I traveled with her and she stayed with me I never saw her without full hair and makeup.”

Among the other guests were Cornelia Guest, William Norwich, Todd Snyder and Bob Colacello, who gave a humorous speech capturing Mehle’s unique character and style, beginning by listing all the people she knew — from presidents to royals, first ladies to stars. He compared her laugh to sparkling Champagne in a glass of Baccarat crystal, and said her talent wasn’t to be nasty but to “nick a little here and nick a little there.” Describing her numerous love affairs, Colacello recalled Mehle saying, “I wasn’t necessarily a bad girl, but I was certainly a busy one.”

Her son, Roger, thanked the crowd for their fond remembrances, saying that while most people knew Mehle as the famed columnist Suzy, “to me, she was my mother insisting I eat my Brussels sprouts.”

“I think she’s up there thinking this party is fabulous,” noted Herrera as the Tuesday evening cocktail reception came to a close.

“And she would have surely written about it,” exclaimed Pepe Fanjul with a broad smile.

Mehle’s proclivity for beautiful possessions was on full display Wednesday afternoon as Doyle’s auction house sold choice items from her estate including a broad collection of Louis XV furniture, fur and feather-trimmed designer capes, costume jewelry and personal memorabilia from her fabulous life. A letter from ex-boyfriend Frank Sinatra — hand signed “Francis” — fetched $550 while a 1991 letter from Donald Trump failed to receive any bids, which elicited uproarious laughter from the small group of attendees.