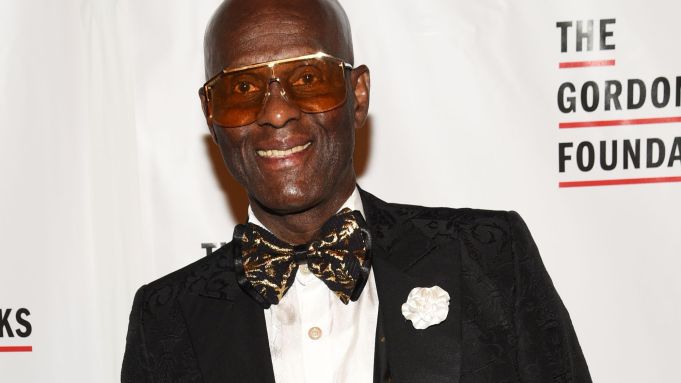 There was a reunion of old friends at the Gordon Parks Foundation Annual Awards Dinner and Auction in New York Tuesday night.

At least, that’s how it felt, when hip-hop heads from the Eighties and Nineties like Pete Rock, Kool Herc and Kid Capri gathered at Cipriani 42nd Street to honor Lakers legend Kareem Abdul-Jabbar, Chelsea Clinton, Kehinde Wiley and Raf Simons, who were all awarded that evening by the foundation. Another reason for the party: it was the 20th anniversary of Parks’ XXL Magazine photograph “A Great Day in Hip-Hop,” a re-creation of the 1958 “A Great Day in Harlem” picture that ran in Esquire magazine depicting influential jazz musicians of the time.

Many of the attendees — Dapper Dan, Swizz Beatz and The Roots’ Questlove and Black Thought among them — shared memories from the day Parks took the photograph on East 126th Street.

“I’d just been raided and I was underground,” Dapper Dan said. “I was there, that day, standing on the corner in my own neighborhood, looking at them and I had a real sadness come over me. I said ‘Wow, I [dressed] all those rappers and now I’m alone.’ I felt detached. I tell my son all the time, the only regret I had is that I should have just walked over.”

Swizz Beatz, who presented with his wife Alicia Keys onstage, told his story behind the picture, and how he missed the chance to be in it.

“I was in Yonkers working on DMX’s album,” he said. “All of the artists rushed out of the studio saying ‘We’re going to get this picture taken by this famous photographer.’ I was on my drum machine. It’s one of my biggest regrets, not meeting Gordon Parks the great.”

Wiley was fresh from a trip to Dakar, where he was putting the finishing touches on his Black Rock Senegal residency program. He also got a chance to celebrate Naomi Campbell’s birthday there, he said.

“It was off the chain,” he said. “Number one, it was in Africa, so we had that delicious African sense of rhythm and beat. All of those people who came into town to see Black Rock were there, they brought that sexy.”

Some of Parks’ most famous photographs, including a portrait of Muhammad Ali, which sold at auction for $36,000, and “A Great Day in Hip-Hop,” which, after a lively back-and-forth, went to a lucky winner for $95,000, were on display. Debbie Harry (she was in the Parks photograph), Maxwell Osborne, Dao-Yi Chow and Slick Rick posed for pictures, while Chelsea Clinton walked the red carpet nearby.

In her speech, she thanked the foundation and the waiters serving guests that night. Then she took a couple of jabs at President Trump, while the crowd nodded and clapped in agreement.

“In this moment of incredible danger, we need our artists more than ever to help us understand how we got here, where we are and how we must go forward,” she said.

WATCH: Carine Roitfeld Takes You Behind the Scenes of AmFAR