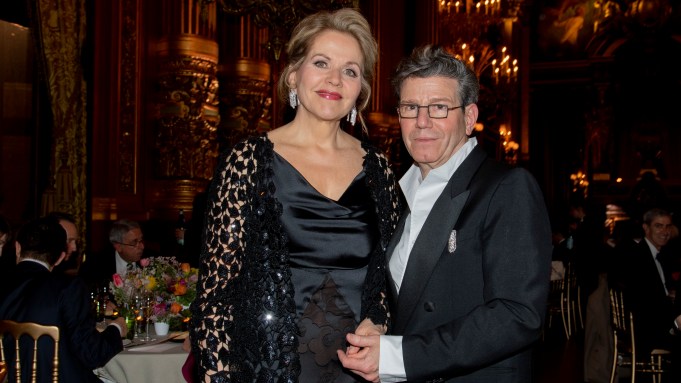 What to wear for a spring fundraising gala when it still feels like winter in Paris? “A white dress, but with black tights,” Vanessa Seward said, gesturing to her silky Chanel number and poking out a dark leg.

The fashion designer was among the beau monde who piled into the Opéra Garnier Wednesday night to hear Renée Fleming pour out her heart. The American soprano shared the stage with the likes of Lambert Wilson, who acted as narrator; violin virtuoso Renaud Capuçon, and Hugo Marchand and Stéphane Bullion, principal dancers with the Paris Opera Ballet.

The social scene in Paris was in full flower this week, with a massive fundraising dinner for Friends of the Centre Pompidou for 900 people on Tuesday, and the design and art fair Pad setting down in Tuileries for a six-day run.

Seward, who has pivoted to painting and writing, noted she has three works on display at Pad Paris. But she’s dipping a toe back into fashion via a collaboration with Bloom Paris, which exalts fabrics from India.

Fleming looked regal roaming the vast stage by Robert Carsen in a burgundy haute couture gown by Chanel, dazzling with her performance of snippets of Strauss, Wagner and Dvořák.

Alexis Mabille said he designed three dresses for the soprano for an upcoming Imax film, including a gown embroidered with green holographic sequins.

Among those in attendance was James Dyson, whose AirBlade hand dryers are installed in the washrooms of the baroque palace, which opened in 1875. “We’re friends with Robert Carsen and Renée Fleming, so we had to be here,” he said with a smile as he and his wife searched for their table in the gilded Grand Foyer, the setting for many a Stella McCartney runway show.

While not strictly a fashion event, the gala attracted executives Bruno Pavlovsky of Chanel, Siddhartha Shukla of Lanvin, and Schiaparelli’s Delphine Bellini; designers Haider Ackermann and Pierre Hardy, and branding guru Sarah Andelman, who accessorized her Schiaparelli gown with an offbeat earring combining a paper clip and soda pull tab.

The annual event is organized by the Paris Opera’s in-house fundraising arm Arop, with all proceeds from private and corporate donors benefiting the activities of the Paris Opera.

The performances ended on a poignant note with Fleming dedicating her last song “to the people of Ukraine who are suffering.”

A Ballet Costume Designer on the Rise