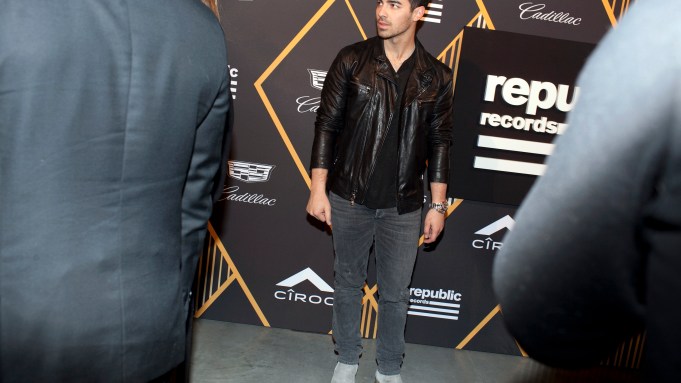 The Jonas brothers — Nick, Joe, and yes, even Kevin — rolled into Cadillac House close to 11 p.m. on Friday night, cloaked in leather jackets with significant others on their arms, ready to party. The trio was fresh from John Varvatos’ show earlier in the evening, and had come to celebrate Grammys weekend in New York at the party thrown by their label, Republic Records.

Nick’s girlfriend, model Georgia Fowler, was nowhere to be seen, but Kevin’s wife Danielle and Joe’s fiancée Sophie Turner came to support their JoBro men. Joe separated off to stand for photographers at the step and repeat, while a bodyguard waited with Turner. When approached by a photographer, she sweetly replied, “I don’t know if I’m supposed to be here,” before said guard leaped to her rescue.

Republic artists Lorde, Iggy Azalea, Hailee Steinfeld, James Bay and Justine Skye were some of the names who showed up Friday, along with Bella Hadid, Kendall Jenner, Hailey Baldwin and more. Andrew Warren and his squad, coordinated in pastel sequined looks, mugged for the obliged house photographers before heading in to Insta story. Joe Jonas and Turner eventually broke free from the crowd and made their way onto the dance floor, kissing happily as they moved.

“I’m not doing a lot…it’s not quite my party this year,” said the musician, who was nominated for three Grammys in 2016. “I’ve been showing a few people my new music, which has been really exciting, but, you know, when it’s my party I’ll come back and I’ll go to the whole bit. But this time I’m just dipping in and then I’m slipping out.”

Bay is in favor of the Grammys’ arrival in New York City. “As fantastic as L.A. is, it’s New York…you just can’t beat it. The pulse keeps going and it just never stops,” he said. “Maybe it’s a better place to hold the Grammys.”

In addition to recording in 2017, the artist was busy designing a collection for Topman.

“Topman are clothes that when I was, like, 15 or 16, and I didn’t know what to wear, Topman was the first place I went to start to understand how to look a little bit better than whatever the hell I looked like back then,” he said. “So it was really cool, a whole 10 years later, to be invited to do that. And I designed it myself — I was literally drawing it out, sketching it out myself.”

As for what he had on that night? “Some Balmain stuff, some Saint Laurent stuff, and this is Equipment,” he said, pointing to his silky blouse. Whether it’s your party or not, Grammys weekend still calls for a little dressing up

Most Memorable Moments in Grammys Fashion