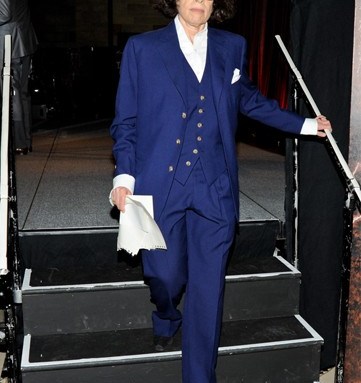 A young woman pulled the editor away, but he bounced right back.

The hall was filling up with rich donors and literary things, young and old but mostly old. This was the Paris Review’s annual fund-raiser gala to build the endowment that supports the magazine.

Author James Salter, the guest of honor, was lingering in the wings in a khaki suit, reminiscing about his first party at Paris Review founder George Plimpton’s town house on 72nd Street, where the basement was filled with “interns’ bicycles and rejected manuscripts.” It was slightly different from this affair, where there were a few hundred people on hand. There were “various alcohols” and scotch.

“I remember going up the stairs. That’s all I remember,” he said, trailing off.

Marie Claire editor Joanna Coles stood near the entrance to the banquet hall contemplating a more current matter: what life at Hearst will be like once Robbie Myers, and Elle magazine, join the corporate family officially.

“I think that we have different readerships, actually. Elle is very much exclusively about fashion,” she said. “Marie Claire is for readers who want fashion in their lives — but it’s fashion with a life. I think of Harper’s Bazaar and Elle as exclusively fashion.”

She reconsidered: “I think I will be the pantomime dame!”

“Do you know what that is?” chimed in Barneys’ ambassador at large, Simon Doonan. “It’s a whole weird thing English people do at Christmastime — they do these commedia dell’arte abortions that are called pantomimes….My roommate used to play the back end of the horse.”

The comment incited an indecipherable game of one-upmanship between Coles and Doonan over their knowledge of different pantomime characters. “I’m happy to play Dandini to either Glenda or Robbie!” Coles said.

Coles spoke over him. “You really should be comparing us to Joe Zee, not Robbie!” she said finally. She tossed back her Bellini.

Farther into the room, Terry McDonell, Sports Illustrated group editor and the president of the Paris Review’s board, bragged about the literary magazine’s endowment.

“It’s more than that,” said McDonell. “I don’t want to make us sound too rich.”

Standing near the door, New Yorker theater critic Hilton Als contemplated the mood on Tuesday night versus years past.

“Of course a magazine is shaped by its editor, and each editor is different,” Als said, explaining how this year stood out from Revels under Philip Gourevitch, who took over the magazine following Plimpton’s death in 2003 and edited the magazine before Stein.

“When Philip was hosting, it was more of a conversation with the audience,” he said. “This is much more about just honoring the writers.”

Gourevitch, who still writes for The New Yorker, was not feeling especially chatty this year. “I’m happy to be here tonight,” he said from his seat at dinner. “It’s good to be here as a guest.”

Gay Talese was sitting one chair away. “I knew George Plimpton in 1959,” he said. “I’m one of the oldest people in this room.”

“The Paris Review has reached a level beyond George Plimpton’s expectations,” Talese continued. “George, who is now somewhere in the literary heaven, would have been amazed because George couldn’t sell tickets like this. I don’t know how this happened. George knew how to have fun. He had a great eye for literary matters, but George didn’t have an eye for legal tender.”

Stein took the stage toward the end of the night.

“In just one year, our paid subscriptions have gone up 32 percent,” he said. “Last month alone we sold 1,000 new subscriptions. In the last six months, our Web traffic has gone up almost 500 percent. Our Web site has reached more than 1.5 million in these last six months. The New York Times has called it ‘the best party in town.’ They’re wrong of course, this is the best party in town.”

After dinner, Times executive editor Bill Keller made a quick move for the coat check and headed for the door with his wife, Emma.

Do the Kellers come every year?

“No, this was our first time,” chimed in Emma, with a big smile.

“We had a friend with a table,” Keller explained, ushering his wife away from a reporter. And, yes, Keller agreed, turning to the door: “It’s the best party in town.”